Pigs are the ultimate addition to any Food Web, being one of the best animals at disposing of waste streams. 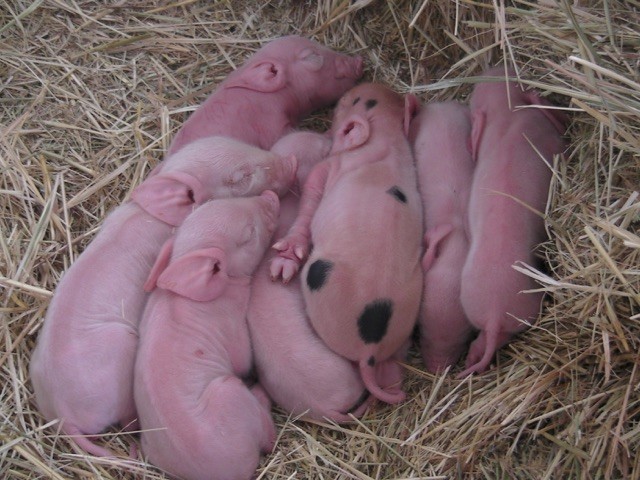 Pigs are truly one of the most enjoyable animals on a homestead. They will eat anything: grass, milk, kitchen scraps, slaughter waste, and much more. Everything they eat is converted into a very tasty and varied meat. They are also extremely intelligent, affectionate, and funny animals, who are a pleasure to be around. 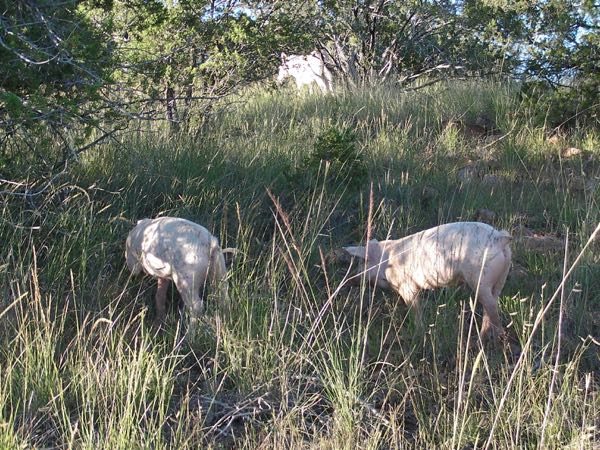 It is because of their intelligence, curiosity and strength that pigs can also be a royal pain in the butt. The phrase “pigs are out” has been heard on more than one occasion at our place, and that’s usually followed by “they’re into the feed again”. Having a well thought out set-up will save you a lot of stress and pig-chasing.

First of all, you need a small corral, where you can close them up if you have to transport, breed, wean, or doctor them. This corral has to be strong, with no gaps or weaknesses.

We find the best pen is a small, two-three feet tall concrete wall (that is sufficiently buried in the ground to sustain a pig rubbing up against it), with mesh imbedded in it and rising up an extra couple of feet.

It is also a great idea to have a shoot and ramp built into your pig pen, so that you can doctor them or load them into a truck if needs be.

You should place the pigs’ feed and water station within the corral, at the opposite side to the gate. This will keep them coming to this place. While they’re engaged in the food, you can just shut the gate, and you have them right where you want them.

Pigs are fairly resilient creatures, but they still need some form of shelter. The shelter will provide them with much needed shade (pigs can sun-burn), keep them tame, and give them a safe place to have babies.

We have a concrete pen inside the barn for them, which then leads out to a small corral. However, we have also used hoop-houses, made out of remesh and vinyl tarps, for temporary shelters out on pastures.

If you’re looking for shade alone, nothing will beat a tree. If you don’t have any near your enclosures, you might want to think about planting something fast growing, especially if it also provides either fruit or leaves that the pig will eat (like mulberries).

Many people keep pigs in an all concrete enclosure. This is for human convenience, not for the benefit of the pigs. Pasture provides a pig with added food (they love to eat grass), dirt (very important to their health and well-being), exercise, and a playground. All of these factors will make your animals healthier, happier and improve the quality of their meat.

It is not hard to fence in pigs. They are intelligent and learn fast, so they quickly develop a respect for electric fences. You do not need to make this fence very tall or with many strands. A three strand fence is sufficient, with a positive line at 24″, another at 12” and a negative line at about 6” from the ground.* We use trees for corner posts wherever possible. We tie a rope loosely around the trunk or branch and then attach the wire to the rope, making sure the wire does not touch the tree itself.

Before you let your pigs out into the pasture for the first time, you should train them to respect the electric fence. String up a couple of strands within their corral. They’ll only need to touch it once or twice and they will have learned. In fact, they can sometimes learn too well. When you move a fence-line, to rotate the pasture to be grazed, they will often refuse to cross where the fence used to be. They’ll get over it, but not without some misgivings. 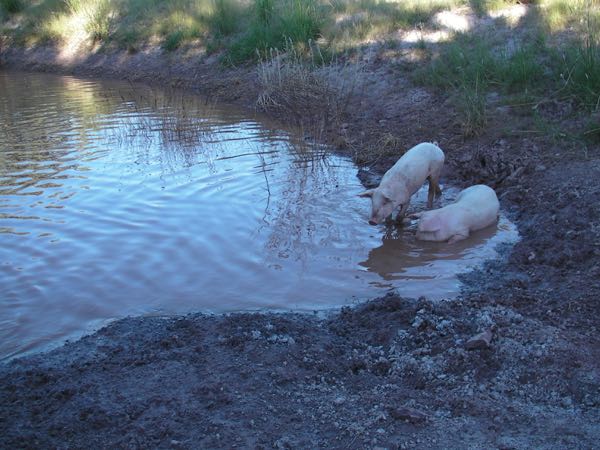 Providing an area where the pigs can wallow in mud will go a long way to ensuring their happiness. Pigs love to root around in mud, covering their whole bodies if they can. They also love to play in water.

Wallowing isn’t just for pleasure. The mud acts as a sunscreen, helps protect their skin from biting insects and keeps them cool. It is something that pigs have evolved to do, and should not be ignored.

We have ponds where they can indulge in this necessary activity. We often organize our pastures, so that the pathways that the pigs have to use lead down into the ponds. As they trample to ground, a natural aqueduct is formed that delivers rain run-off to the ponds. 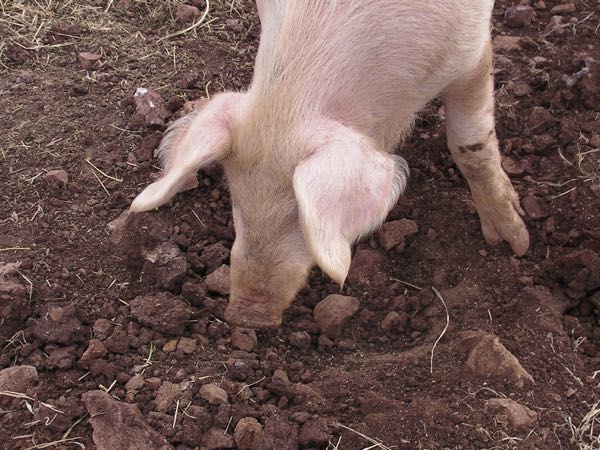 Pigs are one of the best natural plows that you can find. Their snouts are exceptionally strong and can move huge amounts of dirt as they root around.

We often use this natural tendency to our advantage. If we want an area leveled off or terraced, we will put a fence around it and stick the pigs in there. We then spread their feed along the uphill part and let them loosen the ground there and move it downhill. 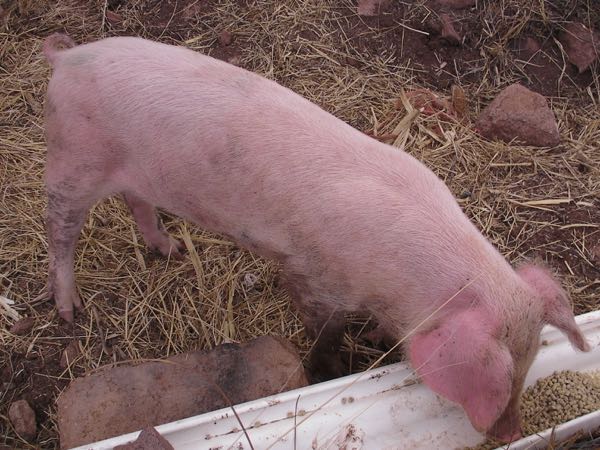 You obviously want to give your animals free access to clean, cool water. The best option is a nipple, fed by a tank or other reliable water source. A pig will quickly learn how to drink from the nipple.

In fact, our pigs have learned not only how to drink, but also how to release some water to create a muddy bath. When we built the barn, we made sure to put the nipple over a concrete area, as this was not where we wanted them to have a wallow.

As for feeders, whatever you feed your pigs from should be strong. We have had several casualties in the pig trough experiments. Something solid and immovable is best, like a concrete trough.

What you feed them is much, much easier. Pigs will eat ANYTHING. They are omnivores and thus require a certain amount of protein to grow healthy. We forage a lot of food for our pigs, including grass, alfalfa, apples, and mesquite beans. We also feed them viscera from when we butcher rabbits or other animals, as well as kitchen scraps. On top of that, we give them some grain for calories, like corn, soy, milo, wheat. We tend to avoid concentrates, as they are expensive and often contain medicines our pigs do not need.

It’s a good idea to use a treat, like grapes, as a way of getting your pigs really tame. After seeing you as the source of something extra special, they will follow you anywhere, literally, and this can be very useful.

Do not fall into the trap of thinking that your pigs are starving. No matter how much food you give them, they will always appear to be hungry and to eat ravenously. That’s just the way pigs are. Estimate their weight, and give them the correct amount of feed that their age requires.

You want to monitor the weight of your pigs. Not only will this tell you how much food they need, but it will also ensure that a sow doesn’t get overweight or let you know when to butcher a feeder pig. That said, weighing a pig with scales can be a chore.

Here’s a little trick we learned from somewhere. You should start if when your pigs are small, so that they will get used to you doing it.

This is not completely accurate, but every time we have used it and then put the pig on a real scale, we have come to within 5 or 10 pounds. 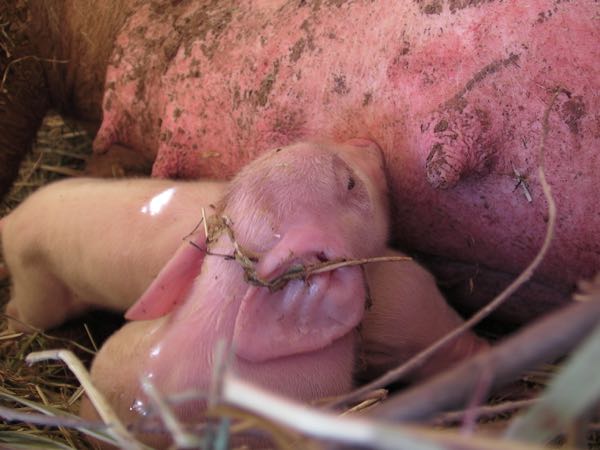 A gilt matures at about eight months old and a boar between six and eight months. The female will come into heat every 21 days. If you have a boar present, he will let you know when she is in heat. When he tries to mount her, she should “stand” for him. A female not in heat will usually try to avoid being mounted.

You can usually tell if she’s been bred as her back end will often be messy and show signs on her rump of being mounted. Note when she was bred and watch out for signs of going into heat about three weeks later.

A pig’s gestation period is about 3 months, 3 weeks, 3 days. Make sure you do not overfeed her. If a sow gets fat, her thighs can grow and inhibit the birth canal. On average a sow should gain about 125 ponds during the gestation period, less if she started off a little fat and more if she was skinny.

When her time is getting near, it is best to separate her from any other pigs and provide her with shelter and a lot of straw to make a nest out of. She will take care of her own nest. Give her lots of material, 2 bales of straw will be enough. When she is about to farrow, she will show nesting tendencies, her milk will let down, and she’ll seem restless. She needs little to no help. We like to be around during farrowing, mainly because it is so exciting to see the piglets come into the world.

One of the greatest dangers for a piglet is that the mother will lie down on them. A sign of a good mother is one that sits and lies down slowly, grunting as she does so that her young have a chance to move. One of our sows had 8 babies her first time, 13 the second time, and 19 the third! A huge factor in the number of piglets in a litter is the quality of food the female receives the week before she is bred. Make sure that you give the sow loads of good, quality food during this time, and you will have nice, large litters. 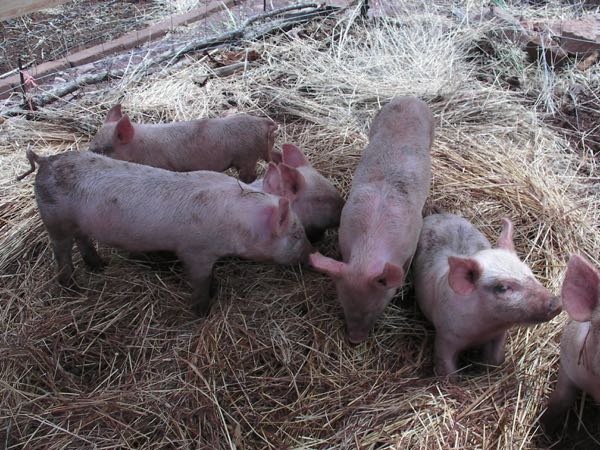 You want to wean the piglets at about 4 to 6 weeks. When you pick up a piglet, it will scream and this sound often upsets the mother considerably. It is best to have a weaning pen set up that has a small entrance way. Start feeding the piglets in there well before it is weaning time. Then, when they are ready, simply close the door. They are separated from their mother without any screams.

If you are buying feeder pigs, this is the age they will generally be when you get them. They are cute as they can be.

For more information, check out our how-tos on butchering and processing pork.