Worms can transform almost all of your organic waste into a rich soil for your garden and a high protein snack for your animals. 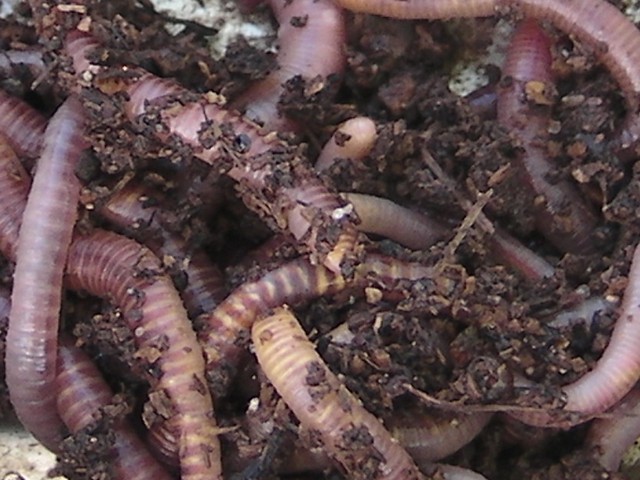 For maximum efficiency and minimum pollution, the feed systems of your homestead should be fully integrated. Earthworms are an invaluable tool in this endeavor. You can feed them all sorts of waste, including humanure, manure, kitchen scraps, coffee grounds, egg shells, and shredded paper. You can then use the worms as a high protein snack to feed other animals, such as pigs, fish and poultry. Plus the earth and compost tea from their casings is one of the richest natural fertilizers available for your garden.

Earthworms lack a social structure that we can observe, but they are proficient diggers and can move enormous amounts of soil for their size. They don’t feed on things directly, but rather, on the byproducts of microorganisms that feed on manures and rotting materials.

They need moisture (60% or more) and the ideal temperatures are between 60-80F. They breathe through their skin, so the moisture content is very important, with too little drying them out and too much drowning them. They can’t live in direct sunlight, and even a few minutes of sunlight can be damaging to them. They also need airflow, and if a manure pile is allowed to go anaerobic (without air), then the worms will flee, or remain on the periphery when aerobic conditions are present.

Worms require a balance of nitrogen and carbon in their feed, but if that balance is present, they can consume a wide range of vegetation and manures. They also need a bit of grit, like chickens, and will do well with a calcium supplement (like egg shells).

Earthworms have a FCR of about 10:1, meaning for every 10 lb of food, they will gain 1 lb. That doesn’t sound particularly impressive, but for every pound of food they consume, they produce almost the same in vermicompost.

There are various vermiculture methods, including worm bins, windrows, and trough rows . Having a container that is closed is a good idea, to protect the worms from sunlight, reduce evaporation, and prevent maggots and such. But there will also need to be a way to turn it and to remove the worm castings.

A flow-through worm bin allows you to continually add waste to the top, and to remove processed worm compost from the bottom. This is an effective method for turning organic waste into garden fertilizer, and is pretty low maintenance. You can take out a few worms from the top, which is where they’ll mostly be eating.

If your main goal is the production of earthworms as a high protein feed or to “seed” garden beds, you may want to go with a simple pile technique. You can create windrows of compost. As the population of worms increases, you can then let the animals into the pile to forage for themselves, or put the material through a worm harvester to extract the worms.