The sun is at the root of all energy on the planet, but some methods of harnessing its power are more direct than others. 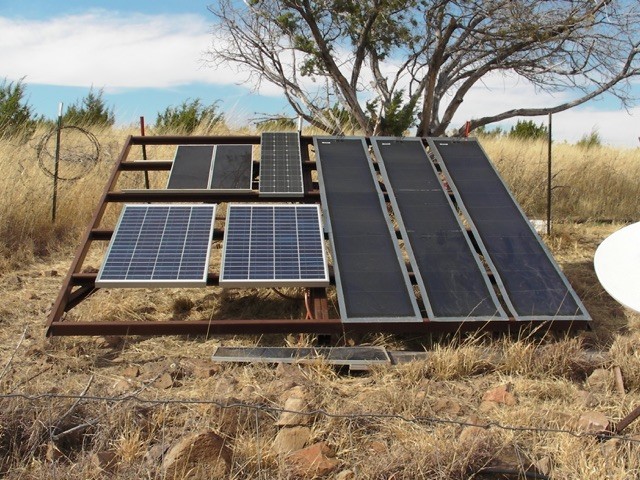 Technically speaking, solar energy is the only energy we have. Every other “energy” is a derivative of the sun’s energy hitting the earth. Fossil fuels, wind power, biofuels, hydropower, and even wood are all products of the sun. It is the most abundant and basic form of energy. Unfortunately, it is difficult to capture without some technology, though the simpler that technology is, the longer it will last. 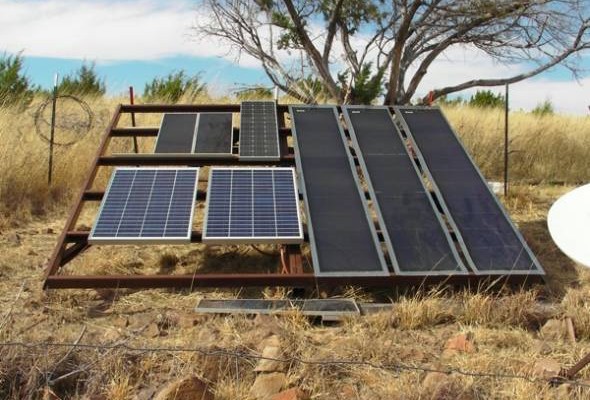 Photovoltaic energy is electricity that is produced by cells than convert the energy in sunlight into electricity. These are the solar panels we all know about and see in many forms.

PV panels have been on the market for at least 40 years, and in that time they have increased in efficiency, but had barely moved in price. This is in part due to the fact that they are rather complex to make and require high-grade silicon, which is becoming short in supply. However, over the last decade, prices have finally started to come down. This makes them a much more viable option, as cost was previously a prohibitive factor.

One of things that have always been great about PV panels is the ease of installation. They are the plug and play option for sustainable energy. All you need is a panel and a battery, and maybe a controller. That’s quite a bit different from a wind generator that has several systems working together just in the generation part of the system. The main disadvantage with solar PV is that they do not work at night or on cloudy days. To counter this problem, you should set up a hybrid system, using solar in conjunction with wind and/or biofuels.

You will need to mount your solar panels to something firm and stable. Some put that mount on the roof, others on the ground. It is a good idea to have two positions on the mount, so that you can lower them to catch the high summer sun, or raise them for the lower winter sun. Putting a tracking device on that mount, so that it follows the sun, will increase their efficiency by up to 25%. However, such devices add to the cost and complexity of the system. 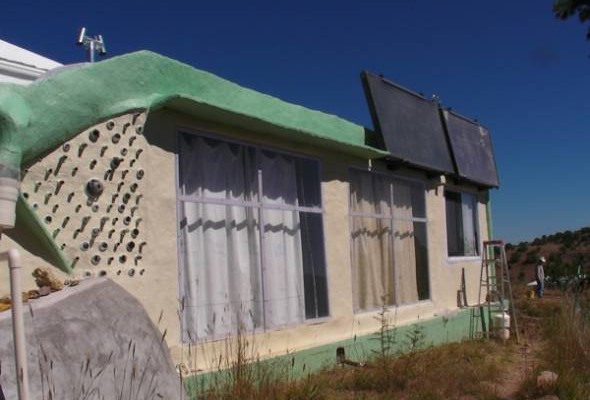 Solar energy is most efficient if used directly as thermal energy for heating water, air, or a thermal appliance. Many systems are available for using the sun’s heat, and by designing an appropriate system for your needs, a solar thermal system can assume a central role in your energy supply.

Heating water is the most common use of solar energy. Most backyard systems consist of a flat panel, storage tank, and delivery pipes. Advanced systems include evacuated tubes, pumps, complex electronic controls, storage tanks, and innovative delivery systems. The system needs to be able to collect the heat in an efficient manner, deliver it to the water that needs to be heated, and deliver the heated water to the use, like the kitchen sink. For areas that experience freezes, it is advantageous to have a different working fluid other than water. Oils, antifreeze, and special thermal fluids are available to bring the heat from your collector to a tank where it then delivers its heat to the water in an insulated container, safe from outside freezing temperatures.

Solar energy can also be used to heat your home in a variety of ways. One of the most efficient, is an active solar system that heats a thermal fluid and delivers it to pipes under or in your floor. This is a ground-up type system and is best installed when the house is built. Passive systems involve double-glazed windows and heat collectors that can heat a thermal mass like brick, rock or concrete and slowly release it throughout the day and night. These systems are designed to reduce their heat gain in summer, where heating is not needed. If designed from the ground up, a solar space heater can provide 60-100% of your heating needs in winter.

Solar air heaters are also very popular and inexpensive to build. They can be passive or active systems. The concept is simple; make an insulated panel with a transparent face, and a black, heat absorber inside. Cold air enters through the bottom of this panel, and hot air exits the top, into your home. For more information, check out our solar heater how-to.

Some designers insist on concentrating the incoming solar energy to generate higher temperatures and efficiencies. These systems are more complex, however, and require tracking mechanisms, heat tolerant materials, and advanced safety mechanisms. It is our opinion that simple systems outlast complex ones. They are also generally cheaper. So, unless you are providing power for many households, concentrating the sun’s energy will probably not be worth the extra effort and design requirements.

We use passive solar thermal very effectively, just by having large windows on the south side of our home. The eave stops the sun from entering the house in summertime, but in winter, when the sun is lower in the sky, the sun almost hits the back of the room. We find we only have to have a fire on very cloudy winter days. 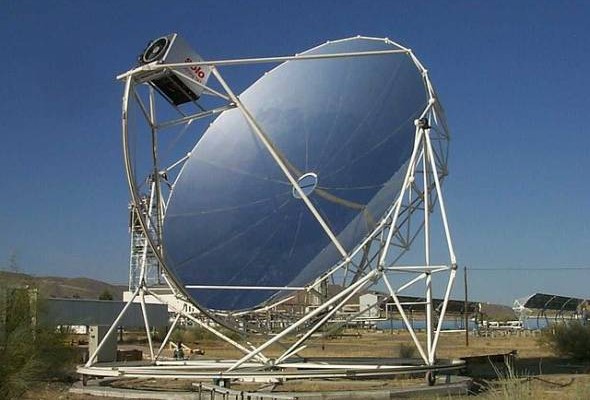 Combined Heat and Power is a system that produces, and makes use of, both electricity and heat. The ways in which you can create the two forms of energy vary, although Solar CHP is one of the most sustainable. It uses the sun’s energy to make electricity, while diverting the waste heat that it produces into other systems like heating water, refrigeration and heating a room.

In a solar CHP, you are converting the thermal energy of the sun into mechanical and electrical energy by using a heat engine (stirling) or turbine (steam or rankine). Once the engine has used some of the energy, the working fluid will still contain a considerable amount of heat, but the engine will not be able to take advantage of this energy. A water heater can transfer the waste heat from the working fluid of the heat system into hot water for domestic use. A heat based refrigerator could also be used to take advantage of this “extra” energy. In fact, there are countless ways to use heat, from heating our homes to cooling them.

Combined Heat and Power systems have overall efficiencies beyond 60%, which is a very high conversion rate. This is because the whole system is a combination of two smaller components. Each of the smaller systems has an overall efficiency of around 20-30% at best. But when combined, they each feed the other, creating a highly efficient result.

Why should this method be limited to just homes? We believe that this type of system should be introduced into commercial buildings like shopping centers, office blocks, hotels, even airports. You can picture the smile on the accountants’ faces in the Love Money or Big Buck Corp offices as they count up the savings they’ve made – whilst also being green! These figures mount a serious argument for a movement towards Combined Heat and Power systems being installed in all buildings.

When coupled with solar collectors, the Solar CHP system is far more efficient than solar PV technologies. And instead of using electricity to generate heat, you are using the byproduct of the electrical generation as the heat source. Generating heat with electricity is a big energy waster, and for an off-grid system, it is a sin. Use the exhaust from a generator, or better yet, from a solar stirling to heat that water, instead of using costly electricity.

But wait a second, I thought electricity was free in an off-grid homestead? Well, it is and it isn’t. It is in that you don’t pay for it as you use it, but it isn’t free in that you have to buy it upfront. You pay for the generator, but rarely the fuel, whereas the grid system pays for the fuel AND the generator, although a little at a time. So, it helps to be conservative, because that up front cost will be a lot less, and using efficient appliances and waste heat is really just common sense, no matter if you are on the grid or not.

Now, some folks will claim that solar thermal systems simply don’t work, and that a Solar CHP system is a pipe dream. But, in reality, these same folks are probably using electricity from a similar system, although it might use coal instead of the sun as the initial input. This is because the big businesses that run utilities found out quite a few years ago that there is a relationship between efficiency and cost. The more efficient their systems became, the less fuel they used for the same output, and the less money it cost to run the system. Sounds simple, huh? So, chances are, your grid power is probably using a CHP system, whether it be nuclear that generates heat to run a steam power station, or a coal burning plant or a natural gas burning system, they will all use some of their waste heat for another part of the system.

So, here’s our chance to take a lesson from the big guys. Combine part of your power system with part of your heat system, and in turn, you get more of both for less input. This is an important concept in solar systems, because we can only capture a finite amount of the sun’s energy. Let’s make the most of it! 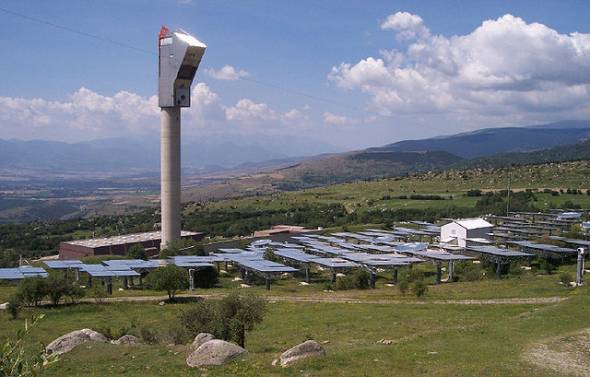 Solar towers are more efficient on a large scale than Photovoltaic panels, so municipal and government programs have developed these systems to take advantage of solar energy. Solar towers can be constructed in a variety of ways, from an array of heliostats to a large greenhouse structure.

Solar towers enjoy a level of efficiency that is not available to the small system. This is because of the area that they cover. The energy of the sun is a function of how much collector area you have, and solar towers are sometimes in the thousands of square meters. The collected energy is then concentrated to the top of a central tower, where it can be absorbed by a high temperature working fluid. This fluid then carries the collected energy to a series of conversion mechanisms, like steam or heat engines. The heat is used to power the engines, which, in turn, powers a generator that produces electricity. The waste heat can be used in other systems down the line to increase efficiency, similar to a CHP system.

Although these systems are not practical for the DIY crowd, they are an important part of the energy production family. They can essentially replace fossil-fuel generation plants, without changing most of the energy transmission infrastructure. Several large-scale systems have been tested for durability and overall dependability and have performed quite well. In fact, when compared to fossil-fuel based systems, the maintenance and continued running costs are several times lower for these plants, making them economically viable.

A solar tower can be made in your back yard, but don’t expect to get much out of it without careful planning and some advanced components. To experiment with the idea, take an old satellite dish (not a big one, unless you like burning your skin), cover it with aluminum foil, and aim it at the sun. The focal point will get hot, and depending on the quality of the foil, it might be enough to actually burn something. You will quickly discover that you will have to adjust the dish every few minutes to keep it pointed towards the sun. This simple experiment is great for heating a cup of coffee, and scaled up, it could power cities.