Diaper free, or EC, is effectively potty training from birth. 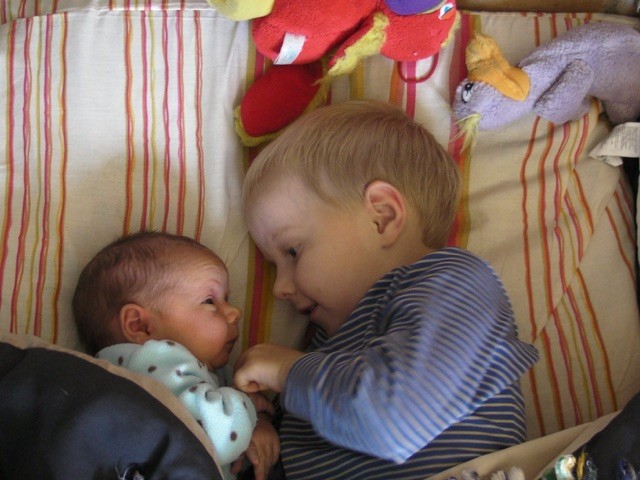 When preparing for the arrival of our first son, Leo, our single greatest concern was the issue of diapers. It is estimated that a child will use an average of 2500 diapers in the first year alone, and some children stay in diapers for several years. Considering that most people use non-biodegradable disposable diapers that end up in a landfill, this is a big problem, and we were not prepared to contribute to it. So what to do?

There are always the old-fashioned cloth diapers. However, this countered our way of life on two levels. Firstly, we had only built one room of our house and our water storage tanks were still fairly limited. This meant that our water was precious to us and the extra laundry, which we did by hand, would use up a valuable resource. Secondly, we used our laundry water on the garden, making that resource go a little further. If we were to put human waste into the equation, we would have had to put it all on our compost pile, a genuine loss for the food producing plants.

There were some biodegradable disposable options, which we would have been able to compost ourselves. However, they were expensive and hard to come by where we live, making them a less than perfect solution. Besides, there is always the chance that a company might lie about their product, attaching the label biodegradable for added profit.

We started wondering what the rest of the world does. Not everyone has the money for or even access to diapers, so how do those people deal with the natural needs of their babies? We did some research and came across the notion of diaper free babies, dubbed Elimination Communication (EC).

This is the process whereby parents watch their babies for the signals that they need the bathroom and then put them somewhere they can go. In a nutshell, it’s potty training from birth. It is based on the principal that even newborn babies know when they need the bathroom, feeling the muscles stretch as the bladder or colon fills. What they lack is the ability to undress and move themselves to an appropriate place, or the knowledge that an appropriate place exists. When you place a child in diapers, they learn that this is the place to go and do not gain control of those muscles until potty training at age two or later. However, if from the very start (or whenever you can) you allow them to associate a place and noise with the action of elimination, they will learn to control their muscles far sooner.

We loved this idea, and were eager to experience it firsthand. When Leo was first born, we would watch his face for signs that he was eliminating and we’d make the sounds “ungah” and “pssss”. We also wrote down the times when he soiled his diaper, so that we could get an idea of when and how often. Then, after a week or so, we started putting him on a little potty whenever we thought he needed to go.

We would make the sounds before and while he would eliminate. The fact that he HATED being in a wet diaper for even a minute helped out a lot, and pretty soon he would do a little half-cry when he needed to go. For most of his first year he would use one or two diapers a day. We used a mixture of cloth diapers and biodegradable disposals to catch the accidents, but needed little of either. He peed in them at night and on road trips, when he slept soundly. And occasionally he would still pee in a diaper during the day, usually when he was too busy playing to let us know or when we were inattentive. He suffered from zero diaper rash.

Over the months, the size of his bowels as well as his control over them increased. Plus his bowel movements became far less frequent and more regular than when he was a newborn, making the whole process far easier.

However, at about a year old, he relapsed. We had someone come up to the house to play with him while we built our house, and he wouldn’t tell her he needed to go. Plus, he started walking and became so engrossed with his new skill that he forgot all about the potty. Still, it was great for the first year and a great idea in general.

If you are striving for a self-sustainable homestead, eliminating your waste products should be a priority. EC not only contributes an enormous amount to that goal, it also lets your child enjoy a dry and happy bottom from the beginning of his or her life.