Insects are a cheap and easy source of protein, for you or your animals. 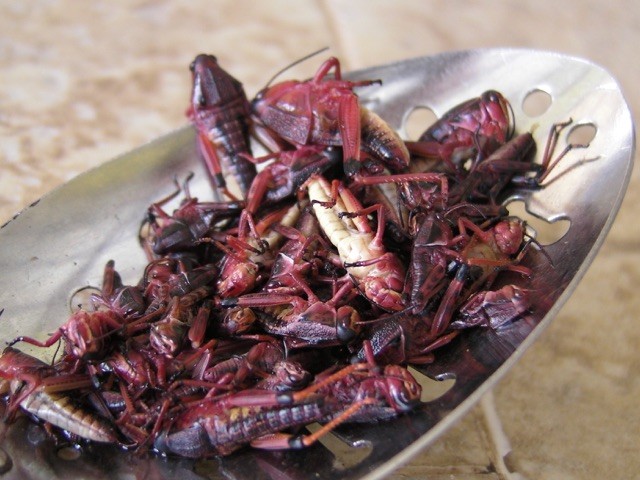 There’s no shortage of insects in the world, which makes for a very reliable food source. While most people in the western world have an aversion towards making a meal of insects, they can provide protein and essential vitamins on a fraction of the resources of larger animals.

One of the insects most commonly used by humans are bees. In this case, we don’t consume the bee for meat or give it to our animals, but rather farm the wonderful honey that they make. If you’re interested in more information about bees, you can take a look at our how-tos on building your own bee hive, bait hive and wax melter.

For the purpose of this article, it’s the wax worms that we’re more interested in. These bugs often live in symbiosis with bees, eating the comb that bees make. When in balance, they do not harm the hive, and can in fact serve as cleaners. However, when the health of the hive is compromised, the population of the wax worms can increase too much and become detrimental.

You can help the bees by harvesting the out of control wax worms. We haven’t yet had a problem with them in our hives, so we don’t speak from experience, but it is said that of all insects, the wax worm is the most delicious. It makes sense; all they eat is wax and honey. What’s not to like? 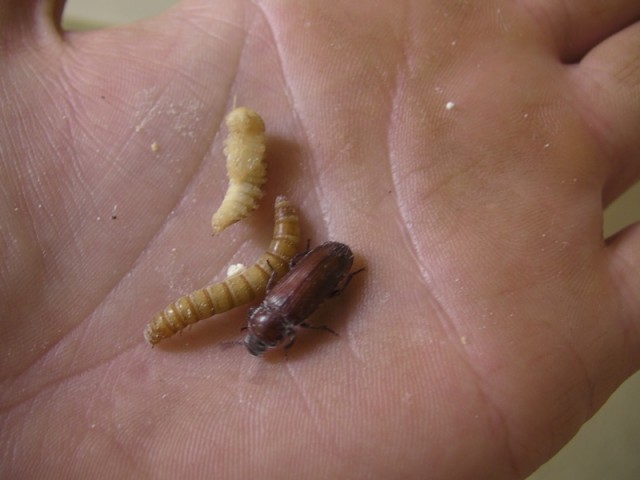 Mealworms are the larvae of the darkling beetle, and they are a very easy insect to raise in a small space. There are three main stages in development: adult beetles, larvae (worms), and pupae. The three should be kept apart to avoid the adult beetles eating any of the helpless pupae.

Things like temperature and moisture can affect each stage, but to get an idea of the time scale, here is a breakdown of their life cycle:

Wheat bran, a byproduct of wheat production, is typically used as the feed, but animal manures, especially dry ones from herbivores like rabbits or guinea pigs, can be included at a 1:1 ratio. They also need a bit of vegetable matter, like carrot peels, potatoes, or squash for water. They are highly efficient at converting feed into protein, with a FCR of 2:1 .

This is an insect that we have started to farm properly. With the right set-up, using a few square feet of floor space, you can create a tower that puts out a few of pounds of worms each week.

They are a great supplement for omnivores like poultry or pigs. We have tamed many baby birds using these little treats. However, they are also very good for humans to eat. We eat them on occasion, and they are really tasty. They have a slightly nutty flavor (like pecan), and the texture is crunchy, subtle, and much better than some other insects.

For our own use, we put a bunch in a bag in the freezer for about 15 minutes, and we then fry them quickly with a dash of butter and garlic. 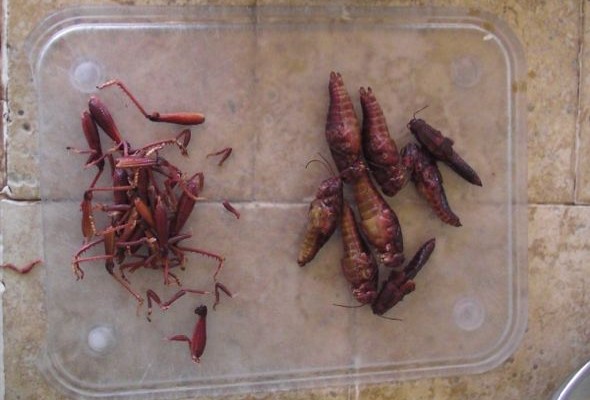 There are people all around the world that eat grasshoppers, and some that consider them a delicacy. They are high in protein, plentiful and easy to harvest. If you don’t think about what you’re eating, they’re not bad.

Grasshoppers are a plague where we live, and thus very plentiful. We therefore don’t have to expend any time and infrastructure in farming them. We will often catch a bunch in season, freeze them, and give them to the poultry in winter.

Please not that there are many types of grasshoppers, some of which are poisonous. If your chickens and guineas won’t touch a particular kind, you shouldn’t either.

We have eaten grasshoppers on several occasions. The best time to catch them is in the evening, when they climb high in plants to roost. Try to get younger ones, not big females that have already laid their eggs.

They’re not as good as mealworms, but they’re not too bad. It’s the more the texture than the taste (which is of garlic and chili) that you can get hung up on. 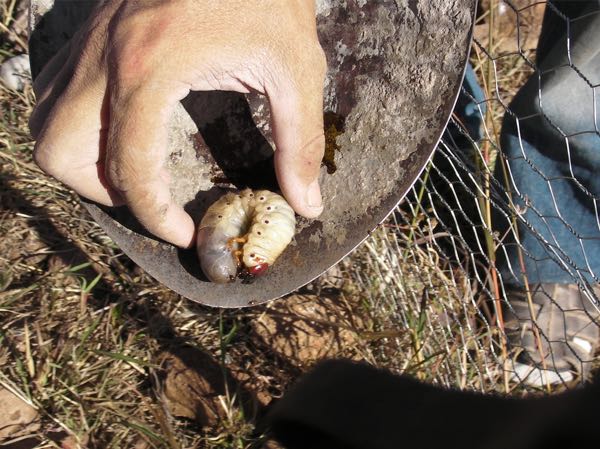 Something we haven’t yet tried, but intend to, is grubs. Whenever we dig through our compost piles, we always find these huge, nasty looking grubs. They are similar to maggots in appearance, but much bigger and fatter.

We’re not a hundred percent sure, but we think they are the larva of either June/ Japenese or Rhinoceros beetles.

They are said to be good to eat, and the main reason that we haven’t yet partaken of this culinary delight is that our chickens would get very upset with us. Whenever we are turning a compost pile that the chickens don’t have access to, they gather around, outside the fence. They look at you with their beady little eyes and somehow compel you to throw them the treats. It’s perhaps shameful to admit how easily we are manipulated by our birds, but we do get their eggs, so fair’s fair. One day we’ll keep the grubs and give them a try for ourselves.

The great thing about our experiments with eating bugs is that our kids don’t balk at trying them. They are too young to have any preconceptions about eating insects, and just judge it on their natural merits. You never know what kind of world they will be inheriting, but having a reliable source of protein that is cheap and easy to farm or harvest (even in a drought) can’t be a bad thing.