A beautiful sunny day, so we decided to go swimming in the barn tank. 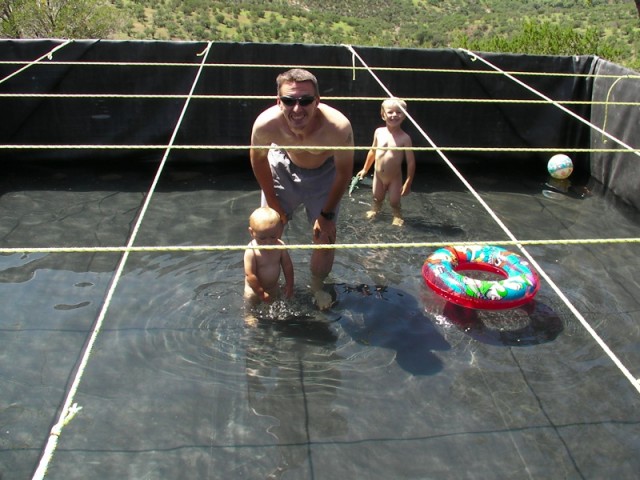 There’s a little more than a foot of water in the tank that we have drained from the house tank (which amounts to about 1500 gallons). The liner is black, so it warms up, or will when we have more than one day of full sun. So we figured we might as well use it to swim in for now.

It was still a little chilly, so we didn’t stay in too long, as the kids’ teeth started to chatter after about 20 minutes. Nonetheless, it was very refreshing and a lot of fun.

I took a couple of photos before getting in, but they don’t capture the delight that the kids showed after warming up some.

Nicky was fearless, putting his head under the water and blowing bubbles like a natural. He has always had a special affinity to water. Even as a newborn, when a colicky tummy would cause him great pain, he would instantly become calm and happy when we set him in water.

It’ll take Leo a little longer to gain confidence, as he is old enough to show some fear of putting his head under. Still, it’s only the first day. We hope to go in as often as the weather will allow us, with the goal of teaching them to swim.

We also put a few minnows into the tank (they should take care of any mosquito larvae until we get the roof on), and Leo was trying to find and chase them.

We went to the city yesterday to buy the materials to finish the tank for our Food Web project. So somewhere into our play, we will have to fit in some work!