After seeing how fascinated Leo is with the bees, we decided to make him his own beesuit. 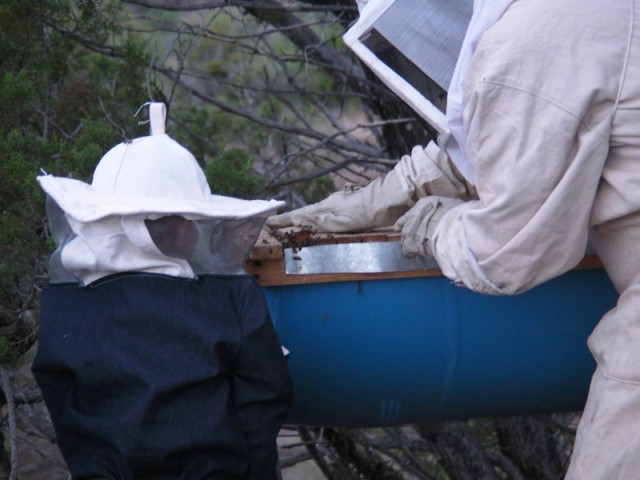 It’s an all-in-one jacket, veil and mittens. Just slip it over the head and you’re good to go. If you’re interested in seeing the howto, click here. We also entered it into a bee competition, so please vote for it at the same link.

For the first test, we didn’t want to be too intrusive. Abe took off the lid and opened the hive a little, just enough to get a few bees out to buzz them. We thought Leo might be freaked out with bees on him, but he was totally calm. In fact, he was fascinated by the bees and kept asking to see the queen (which wasn’t allowed on the first session). However, as the budding new beekeeper was leaving, he squished a bee by mistake (he was climbing through the fence and as he put his hand on the ground there was a bee on his glove). The smell of squished bee enraged those that were out and they went for him. It looked like he was about to lose it, but Abe calmed him down and he listened to instructions. 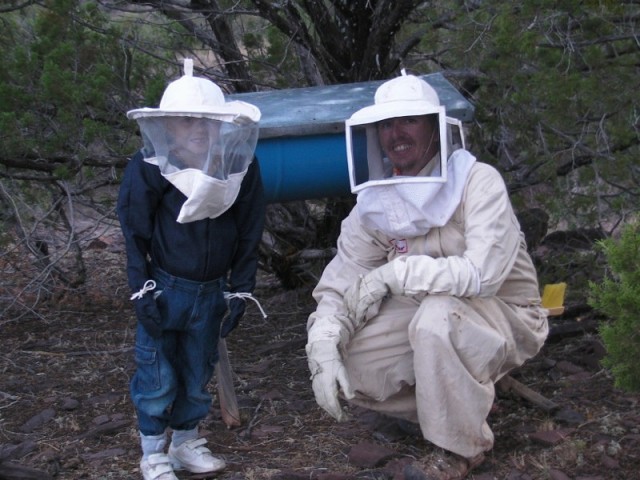 They came back to the house, and went into the entranceway. The door to the rest of the house was closed, so they could brush any bees off in the entranceway and then come into the kitchen and take the suit off. This double door precaution is always a good idea when handling bees, as you never know what might happen.

Leo had been stung on the hand where the string brought the suit tight against his skin. For this reason, we decided to double up the fabric in the mittens area. Everywhere else, he has an added layer of clothing under the jacket, plus the jacket is loose around him, so no bees can touch him. And the veil part worked awesome.

At first, he was mad at the bees, and the sting hurt. However, as he calmed down and the toothpaste took effect (rubbed onto the sting, toothpaste helps with the pain), he started to talk it all through. We explained that the bees weren’t being mean, but were just trying to protect their home and friends. And we also explained that no matter who you are, if you are going to keep bees, you will be stung sooner or later. The two good things about being stung is that each sting becomes less painful and that we found out he’s not allergic. He’s now ready to go out again.