Another wonderful visit from Bob and Jan. We miss you already. 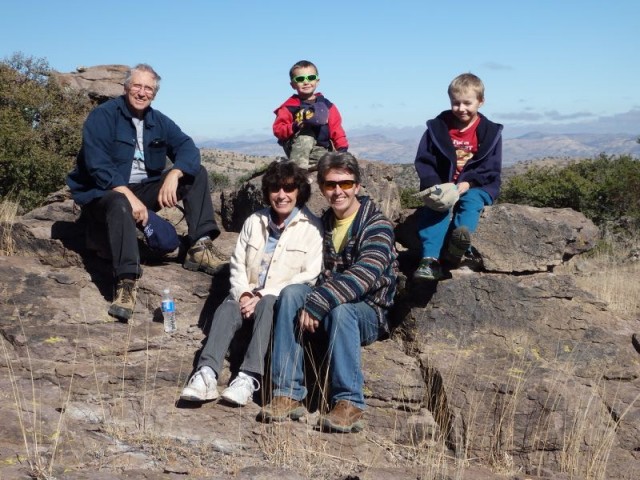 I know I haven’t written in a long time, and have probably missed posting about a ton of projects we’ve been doing, not to mention kids’ Christmas parties, etc. However, only one thing has been occupying my mind recently, and that was my mom and Bob’s trip to see us this Christmas. Although we see them every year, it has been more than a decade since we’ve spent a Christmas together, and I was just too excited to do things like blogs! 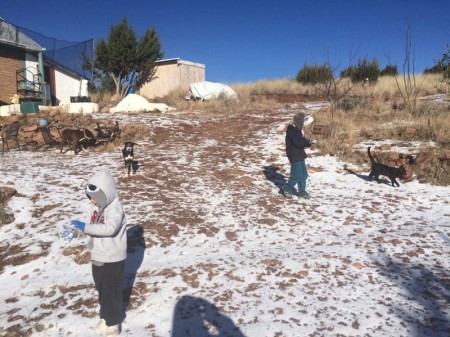 We had a great time, with only one downside… the weather. Our winters can get a little cold, with an occasional freeze, but it’s usually calm and sunny, which takes the edge off the chill. However, for the duration of their trip, we had several hard freezes, snow (!), gale force winds, and almost permanent cloud cover. It was a real shame, as our hiking opportunities were limited. But we made it work by baking tons of cakes and cookies, playing lots of cards, and Bob got to enchant the boys with his amazing story-telling ability. Of course, now that they’re gone, the sun is back out and everything has warmed up again! 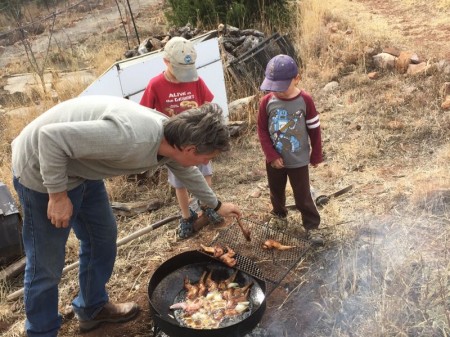 One of the things that Abe and I enjoyed most was getting to show off our food collection. We had the usual home-grown rabbit, chicken, and Muscovy duck, which are pretty much always tasty, no matter what you do with them. We also had the prosciutto and lonzino (cured duck and rabbit) that Abe has been working on, the jellies we made this summer, and our new batches of cider (which turned out fantastic!).

We also managed to slip in a couple of cookouts, in between the worst of the weather conditions. We had a BBQ and Disco (our personal favorite). 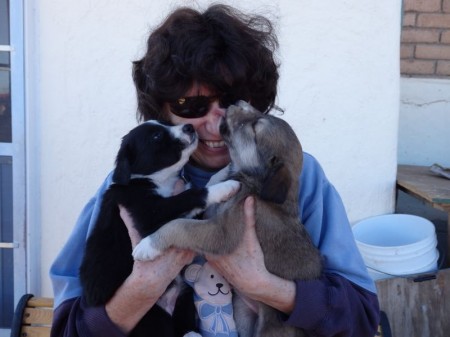 From Janet’s perspective, the highlight would probably have been the puppies. We had to bring them inside on several occasions due to the cold and it became Jan’s job to feed and cuddle them, a job which she took very seriously. Even when they went out during the day, she would often sneak out there to do her “work”.

Most of them have now gone to their new homes, with only a couple remaining (both of which have several interested parties). 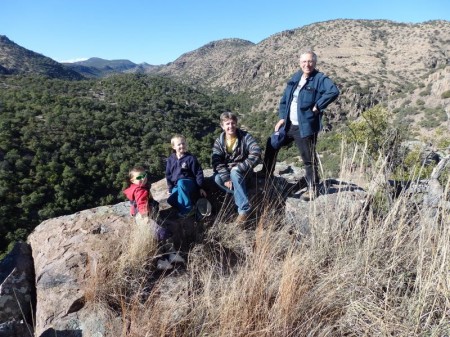 The boys and Bob were most excited about the hiking. Whenever the weather would clear even a little bit, the big boys would don their woolies and go for a hike. On the last day, the sun was out all afternoon, which allowed us all to go for a long walk around our surrounding hills. It was really fun, and we all got to climb a bunch over jagged rocks and boulders.

Unfortunately, they have now gone, and the house feels a little empty. School is starting back though, so there’s not much time to feel sad before the usual routines take over. Click here to see all of the photos from the set below.