We have been getting visits from our neighborhood coyotes. 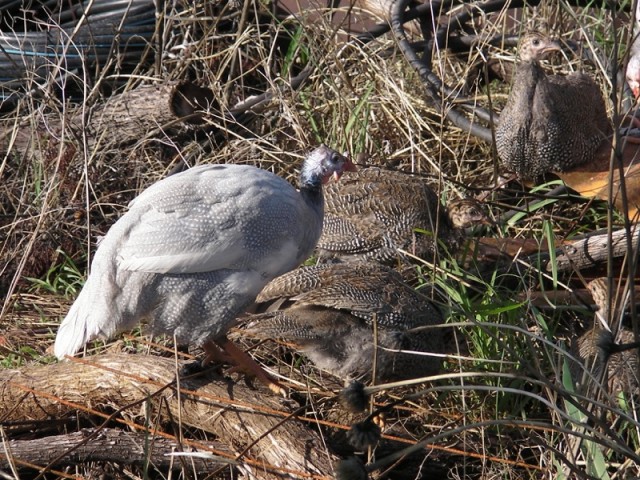 It started about 10 days ago, at the end of October. Early in the morning, we heard and saw a bunch of guineas squawking and flying across the property. What the …? Sam was going crazy, but at first he wasn’t sure what had happened. And neither were we.

Abe ran with Sam to where the action was happening. They scared one coyote, with a bird in his mouth, into dropping his prize, unfortunately already dead.

The guineas began to come home over the course of several hours, having taken to the trees and stayed there until they’d calmed down and the threat was gone. Three were missing. One we had in our possession – skinned and cleaned, ready for roasting. We found the trail and feathers of the other two – the bastards got both of our white ones, one of which was our dominant male.

[flickr_set id=”72157627532956200″] Since then, the predators have returned a couple of times, without any luck. The guineas have figured out how to handle it all, and are a little more cautious. The fly right back to the barn. The coyotes do not cross the electric fence and will not come near the house, barn or Sam. If we could only teach the birds to stay within the fence (each attack has happened off our property), we’d be set.

Sam is one of the fastest dogs I have ever seen and the last attack, he actually caught up to a coyote (not sure what happened when he did as the two of them disappeared over a hill). Sam didn’t have any wounds on him and so far the coyote hasn’t been back. We’re forming a game plan regarding control of this issue, as we  need to do something before winter sets in and they get really hungry.

The one plus of all of this was that we got to try roast guinea. It was delicious! Very tasty and moist, although slightly chewy. The chewiness is most likely a result of the stressful way that she died, which will not be the case when we get to butcher our own animals.