Just spent the last two days cutting rabbit meat and cooking it all up into various meals. 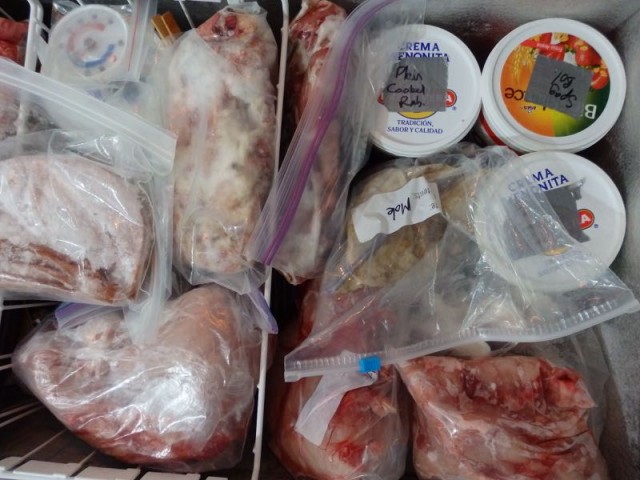 We keep a bunch of rabbit carcasses down in the town house freezer, as it’s easier for people to buy them from down there than come up to our house. A friend of ours has a key in case someone wants one while we’re not there. It’s an arrangement that works for everyone.

The other day, our friend called us to say that she had gone in to get a rabbit and the fridge wasn’t working. So we went down to investigate. Sure enough, a computerized component had burned out (it’s still under warranty, so the repair won’t cost us anything beyond a trip to the city). All the meat had defrosted, though it was still cold. We gave a few away, and then brought the remaining 13 back home.

You cannot refreeze thawed, raw meat, but once it has been cooked it can then be put back in the freezer. So I spent one day cutting up and grinding six of the carcasses. I then made Bolognese out of half of that and cooked the rest plain (to be used on pizzas or in stuffed squash, etc.). The next day, I cut up the remaining 7 into chunks, and made mole and curry out of it.

It was a couple of days of added work that I hadn’t planned on, but it does now leave me with a whole bunch of frozen meals (the freezer is FULL), to be thawed whenever I don’t feel like cooking. In some ways, it worked out well, and I may intentionally do the same again. The one complaint that I have about where we live is that there are no restaurants. I like cooking, and the food we have here is mostly home grown, so very fresh, but it’s still nice to have a day off every once in a while!