We recently changed our first flush system to include a filter. 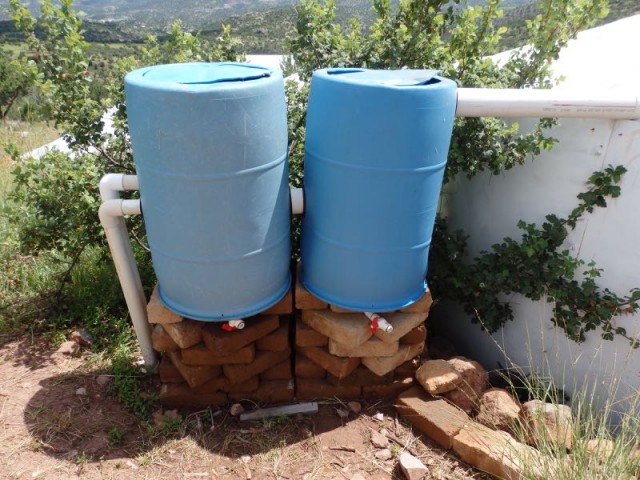 A “first flush” is an important part of any rain catchment system. It is placed somewhere between the gutter from the roof and the storage tank. It is designed to stop major debris and dust from getting into the water tanks.

We have been gradually trying out and improving our first flush system. The latest development has been to include a filter.

We have two downspouts and pipes coming off our roof, to divide the flow of water from a hard rain. These go into 2 55 gallon barrels set up as a radial flow clarifier, which is a fancy way of saying a settling filter. 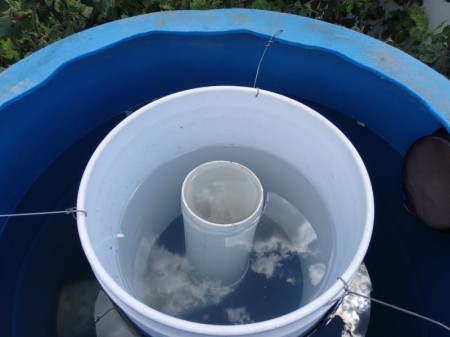 The two pipes go into the middle of the first plastic barrel (using uni-seals to prevent leaking). The pipes are surrounded by a 5 gallon bucket without a bottom. This makes the water flow down, which makes sediment fall to the bottom of the barrel. The water must then rise to exit a screened pipe and enter the next barrel. This barrel is set up the same way, with a buck to make the water snake through and leave dirt and debris in the barrel, while clean water flows through to the cistern.

Both barrels have valves on the bottom, so that we can empty the debris that settles to the bottom. We will periodically empty these barrels after long dry spells, so that the first rains wash the roof into the barrels before any water makes it to the storage tank.

So far, it seems to be working great. The second barrel is much, much cleaner than the first, and the water that enters the tank is even cleaner. We’ll see how it plays out over time.

I added the photos of the improvements to the original “First Flush Filter” flickr set, so the photos below will include both designs at random. This may be a little confusing, but if you’re interested in the subject, you can use these photos as a link to the whole flickr set to see the progressions.