It was Abe's birthday today, and Leo had a wonderful present for him. 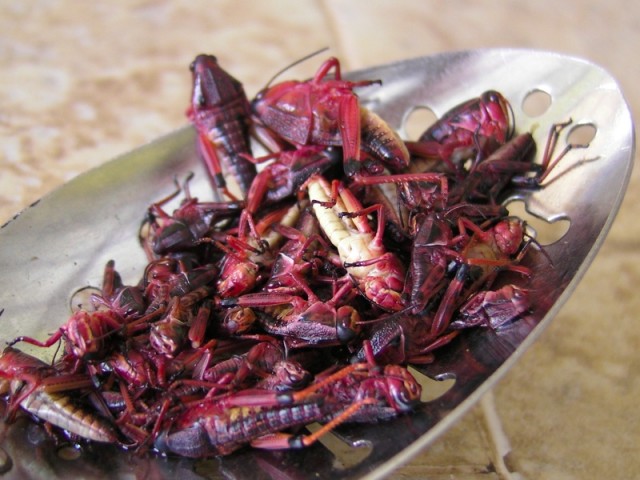 We’ve had the most insane grasshopper explosion we’ve ever seen here. They’re everywhere, and I mean the ground literally writhes with them moving about.

We’ve had the three bigger guineas loose in the garden, the chickens wondering about outside the barn, and we’ve all been picking up can-fuls to feed the baby poultry who can’t yet go out to free range (although they have now been moved to a pen in the barn). And we haven’t begun to make a dent.

[flickr_set id=”72157634799011816″] So anyway, during one of our countless gathering sessions, Abe had said, in passing, “we should eat some”. We’d tried them at the end of the grasshopper season and had found them a little chewy, so we figured we should give the new, tender ones a go. Anyway, Leo obviously made note of this comment and this morning he went out to gather some up. Once he had a good amount, he went to Abe and said “These are for your birthday, to eat”. What a sweet child!

We cooked up a bunch (for those of you interested in trying some out: you clean them in water, then boil them, and finally fry them fast with garlic and chile). Actually not too bad. Leo and Abe gobbled them up, repeatedly commenting how tasty they were. I thought they were fairly decent – tasted of garlic and chile and texture not bad at all. Nicky was the only one who wasn’t convinced. He made a face after each bite he took. It has to be said that Nicky’s kind of a snob when it comes to food. At 2, he loves things like goat cheese, olives, tomatoes from the vine, gravies, cider sauce, wine – you know, the usual toddler fare! And I guess he just thought bugs were a little beneath him. Oh well, I’m sure he’ll learn, especially having a father whose birthday is made by the gift of a wriggling mass of grasshoppers!