Put in the main components of the orchard's irrigation. 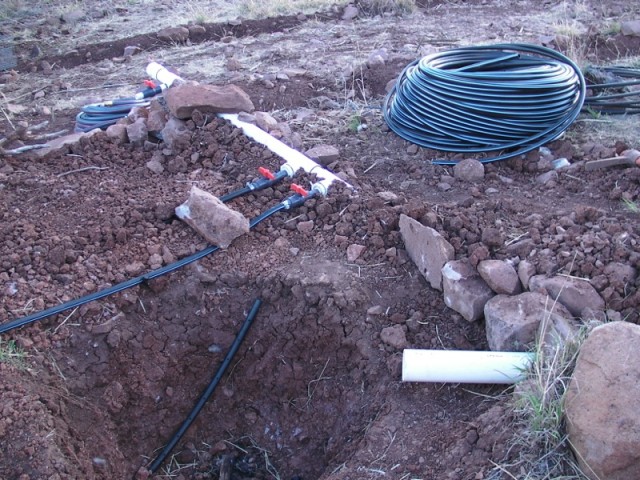 The irrigation system consisting of 2 main levels: surface water through drip irrigation, and deep watering through pipe that go below the trees.  Additionally, we have a hose and the swale for backup water.

[flickr_set id=”72157640991263495″] First of all is the main line to the tree spots. There is a valve on each spot so that they can be turned on and off. Each valve feeds the actual watering pipe, which goes underground, watering the tree’s roots, but not the surface. We tested each before they were buried and adjusted the flow, so that, with all 9 tree spots turned on, 1 gallon per tree takes about 5 minutes. So far, only 4 trees have been planted (2 mulberry, 1 nectarine and a plum). We have cuttings from figs, grapes and pomegranate that will be going in this level when they’re ready. We’re still looking for almonds.  The shrubs and smaller trees will be watered with deep pipes on this system as well.  It’s easy to add a spot, just poke a hole in the pipe and pop in an emitter valve.

The second tier waters the surface with drip lines.  This works for smaller plants and vines that will constitute the lower levels of the forest garden. It has its own main valve, plus will have a valve at each spot (not yet installed). This will branch out and water the surface of the plants to be placed around each tree.  This will be a slow watering system, so we’ll leave it on for several hours to really soak these areas.

[flickr_set id=”72157640991263495″]
The third is an old-fashioned hose. Just in case there’s a problem with the irrigation, the hose acts as a backup. It will also water things like the hedge of rosemary, rose, lavender, sage, which might need a little water to get it started, but then it will be on its own. 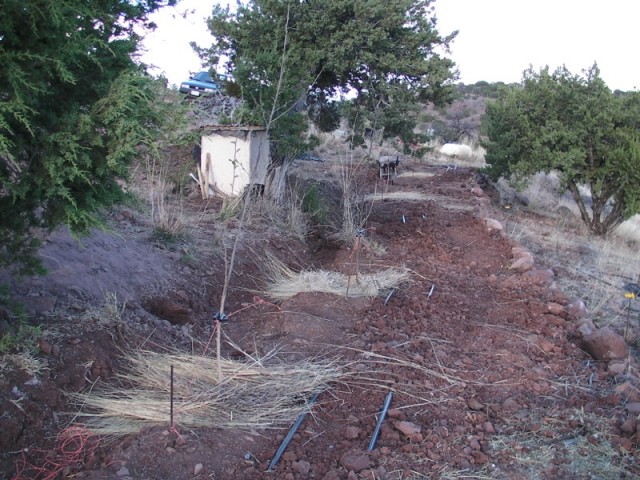 The last line of irrigation is the overflow from the water tanks and a trench for rain runoff from the road. Both of these will feed the main swale/path in the orchard during big rains. They can also be rerouted to the pond, should it ever rain so much that the plants would be flooded (we’re trying to prepare for any eventuality that the planet’s unpredictable weather system might throw at us).

Still a lot of work to do, but it’s getting there, for this first terrace at least. Don’t forget that the orchard has many terraces to come.  We’re testing techniques on this terrace to scale and replicate for future terraces.