We finally have Muscovy Ducks on our property. 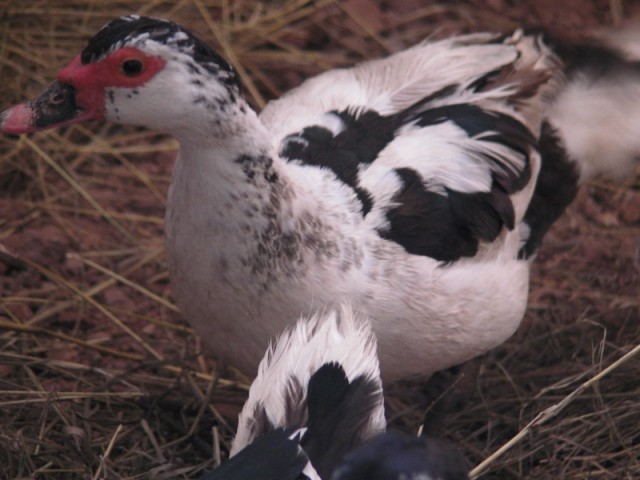 We’ve been looking for Muscovy Ducks locally for a long time now, but couldn’t find any.

They are different from most domesticated ducks, which are descended from the Mallard. These are native to Mexico, Central and South America, and were domesticated centuries ago by Native American cultures (pre-Columbus).

They are larger than other ducks and have a leaner meat that is often compared to sirloin steak. They are also supposed to be quieter (often referred to as Mute Ducks). Another benefit for us is that they can be aggressive to predators, making them far less susceptible prey, and don’t need as much water. Plus, they are supposed to be a more effective fly control than poison, as they catch over 80% of the flies they try to grab.

[flickr_set id=”72157644099597556″] So anyway, that’s a sum up of why we wanted them, but no one seemed to have any. We put the word out with a few bird guys we know, to no avail. Eventually, we decided to order some eggs to incubate. As we delivered the eggs to one of the bird guys, who has several 5000 egg incubators, he told us he’d finally found some Muscovies. He called the source, who brought us three ducks. They’re young, but apparently just started laying.

For now we have them shut up in one of the barn pens, with a barrel of water to play in. Once they’ve gotten used to us and the place, we’ll be letting them loose and taking them down to the pond.

They are beautiful, and we are super excited to have them. Also looking forward to having ducklings in another month.