A lot has been going on within our flocks of birds, including new pens and babies. 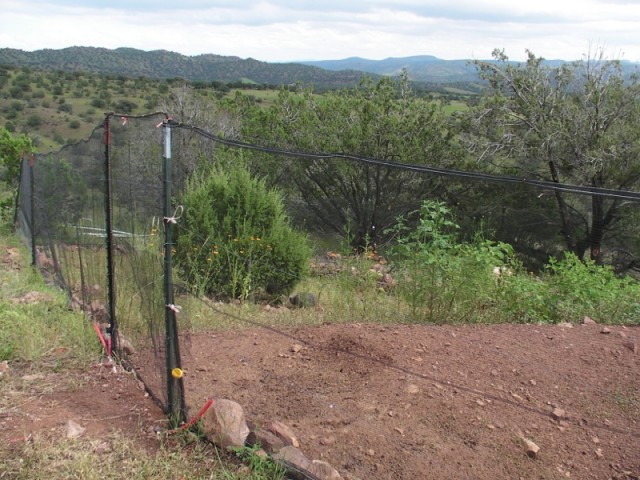 A couple of months ago, we built an additional 1000+ square feet poultry pen, so we could split our poultry into several family and breeding groups. It is located on the eastern side of the barn and is made of orchard netting tied to posts, with an electric fence around it. The reason we used these materials is that they are cheap, easy and fast to put up. The height of the fence (5 feet) keeps the birds in, and the electric fence keeps predators out. It has been a great success.

Flickr API error: Photoset not found
However, even better than the pen itself, is the fact that they have access to under the rabbit cages. We originally had earthworms under the cages, which was an idea worth testing. Unfortunately, during the hotter months, flies were able to breed in the manure, which created a pest. We then removed the worms to a flow-through worm-bin and started cleaning out the manure each week and putting it in compost bins that the “orchard” poultry could patrol for bugs. Now, with the “eastern” chickens and guineas being able to walk under the cages and scratch around, our fly problem has disappeared. They also eat any spilled feed, as well as much of the manure itself. We find that we hardly ever have to clean out the rabbits. All we really have to do is add a layer of compost every once in a while, just to absorb the urine. For this, we use one or two year old humanure, which offers a further integration of our homestead systems. 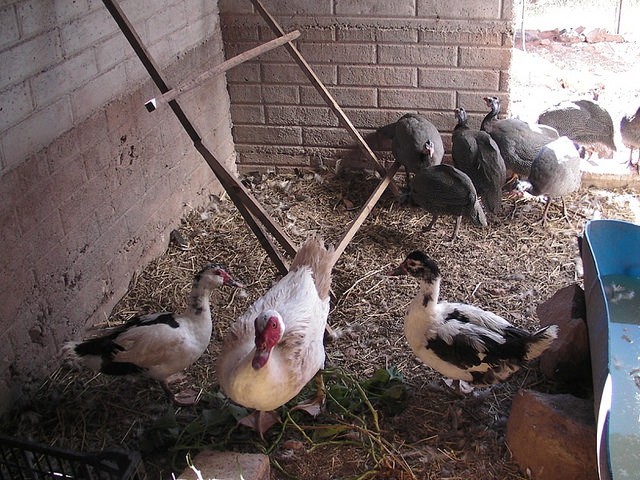 So, we have two big pens for the adult poultry. These are opened during the day to allow the birds to hunt bugs and eat grass seeds around the property, and then closed up again at about 4pm for predator control. We also have three smaller pens that we can shut within the barn itself. Right now, one of these remains open to the corral to allow the ducks and the young, but grown, guineas to come and go. The middle one is occupied by a duck setting a nest. The last one houses a mother guinea and her third brood of the year, hatched just a week ago.

Each group of birds seems happy and thriving, and the setup for each is working really well.

Our success has created more work for us though: we now need to butcher and eat some guineas, as we are suddenly overrun by them. There is also a rooster on the cull list. We have three when only two are needed, and the oldest one has now gone for Leo a couple of times. It’s something he started doing when one of his hens was setting, so he can’t really be blamed for his behavior, as he’s only doing his job. But seeing as the other two are unbelievably tame and have shown no sign of aggression, he is the one to be culled.