We didn't like the setup for the weaned rabbits, so we have changed it. 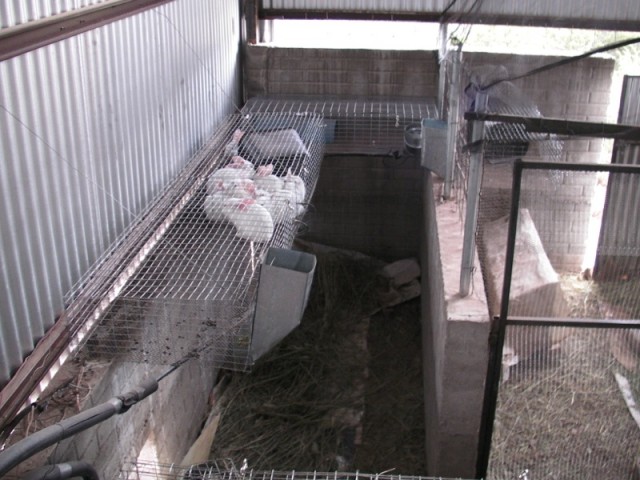 We had the baby rabbit cages hanging over the adults’ burrows, with trays underneath for catching manure. It didn’t work out. To keep it hygienic, we were having to clean the trays every day, and part of the whole Food Web concept is to make animal management as easy as possible without infringing on the basic needs and desires of the animals, like cleanliness.

With the adult rabbits, the manure falls into worm bins, and there is very little work involved for us. This also gives us two valuable resources: worms as a treat for poultry and vermiculture for the garden. A win-win system that we figured we would mimic for the babies.
[flickr_set id=”72157634088708319″]

So we moved all the cages to places where we could have worm bins underneath. For right now we just have tarps and weeds underneath to catch the manure, which we clean out each week. We’ll finish the system in a week or two with boxes and worms. The poultry has access to this area, so they can scratch through and eat any fly maggots that may be growing there, plus any spilled feed of course.

And one further issue is that we don’t have enough cages. If we put the weaned rabbits in the square footage that other people recommend, they seem way too cramped. So, we are going to use a smaller cage for the 4 and 5 week olds, who snuggle a lot more. Then larger ones for 6 and 7 week olds. And then we’ll build them a colony style pen (like we had before) for the 8 – 10 week olds. Another job on our To Do List, which never, ever seems to go down!