Putting the pigs to work. 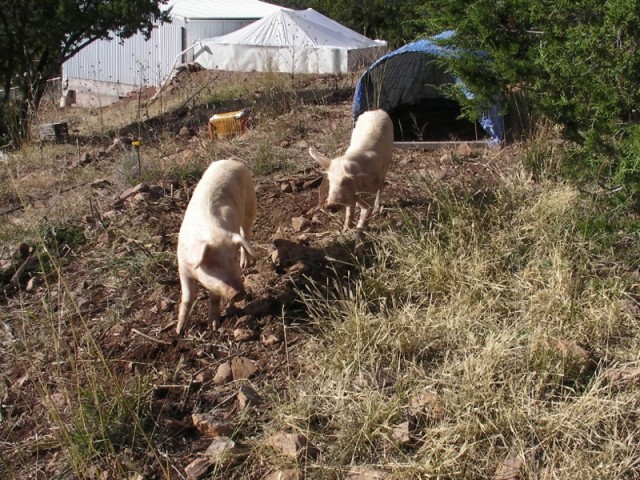 Every animal has natural tendencies, things they love to do. Where possible, we try to put those tendencies to good use. The perfect example is the pig dozer.

Pigs love to root around in the dirt and dig things up. We have noticed in every pig pasture we have that there are areas where the pigs have terraced a slope. They pick a spot they like, under the shade of a large tree for example, and start to dig up the dirt and rocks until it’s smooth and level. It’s really quite incredible the amount of dirt they can move.

So, as we may have mentioned, we plan to plant a bunch of trees this spring. We have picked out the area that will become our first orchard. We know what trees we want to plant, and the spacing and water system that will accompany them. What we lack is some manual labor to terrace the area. So, we decided to use the pigs.

We penned off, with electric fencing, an area that is long and wide, the first row of our orchard. We put a few rocks on the south and downhill side, to act as a retaining wall. We then made the pigs a temporary shelter (a large hoop house) and put them in there.

We gave them food and scraps straight on the dirt, as well as the water we use during rabbit butchering. They love rooting through the dirt looking for tidbits. We also put a water nipple on a stake in future tree spots, as they dig deep wherever they can make a puddle.

They were in there three weeks and did a great job. We put them back in the barn and regular pasture when we went to visit family for Christmas. We are now doing a little work ourselves – adding another layer of rocks, moving the fence uphill of the rock terrace, dumping a bunch of compost. In a day or so we’ll let them back in there, so that they can finish the first layer.

And don’t think that they’re out there working alone. They’re not. The chickens and guineas visit regularly to help them scratch through the compost and newly upturned dirt.

We’re very impressed with what they’ve accomplished so far. The photos really don’t do it justice. When it’s completely finished, we’ll try again with the photos and see if we can capture how level is has become.