We have replaced our grey water filter with a biological one: earthworms. 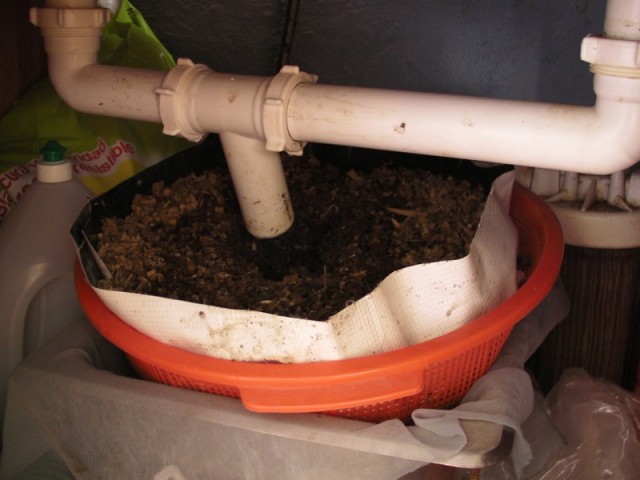 In short, we installed a two tier screen system under our kitchen sink a while back and it hasn’t been working as well as we had wanted.

There were two main issues. Firstly, the water going into the wicking bed part of the indoor garden was not as clean as we would have liked. Nothing solid was getting through, but the grease from the water was. This will eventually result in it becoming blocked up again, something we would rather avoid. The other issue was that I was having to clean out the screens every other day or so, which was OK, but it’s one more chore on my list that is possible to avoid.


So we have replaced the screens with a boxed of worms and bedding. The box is something we threw together with things we had lying around, as a test. If it works out well, we will improve it and make something custom for the space. We then added another box of worms and bedding into the bed itself, and put a “bag” of sawdust on top of it.

The water that comes out of just the one box is super clean, so we assume that it’s almost drinkable after the second one (a theory we are not going to test).

We’ll keep you posted on our results, but so far it’s been a week and it’s great.