A couple of days ago, we went and picked up our new rabbits. 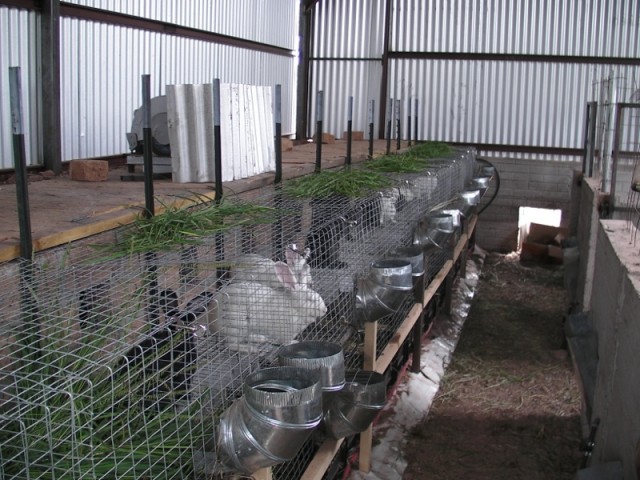 We’ve always had “mutt” rabbits, and while the colors were great and made naming easy, they did not gain weight as quickly as proper meat rabbits. We didn’t mind too much, but we are trying to make our system as efficient as possible and weight gain is a major consideration. So, for the new barn, we have got some good stock.

[flickr_set id=”72157635467401545″] We still have a few rabbits in the old barn, but we are gradually reducing their numbers and we are down to just a handful. We’ve mostly been using a tractor systemfor them.

In the new barn, living above the quail and earthworms, are 5 New Zealands, one male and four females, and 4 black females whose breed we’re not sure of, but they match the others in weight and age.

We started them all off in their own individual cages, but after a day to settle in we opened up the door in between each pair of cages. Most pairs now snuggle up and groom each other, but there was one personality clash, which we had to watch and tweek. We’ll probably open doors in between three cages in a while, as three seems to be the ideal companion group.

None of them have been allowed into their burrow yet. We want them to get into the habit of using the cage for the bathroom, so that we don’t have to clean out the burrows too often. We want the worms under the cages to do that job for us. A few more days and we’ll open those doors.

It’ll be interesting getting to know these guys – they all look so similar than it’s hard to differentiate, but they’ll probably become more distinct as we become better acquainted!