We went to visit Grandma Vickie for Halloween. 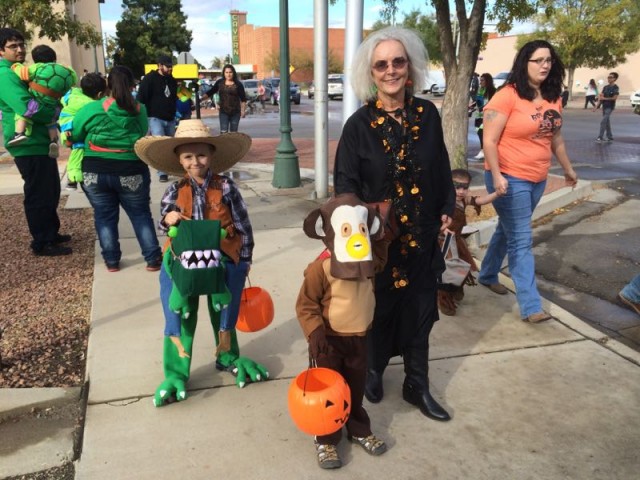 There are many countries and cultures that have some kind of Halloween, All Saints’ day, Day of the Dead type of celebration, involving ghosts and ghouls, but America is the only one that I know of that has made that into a “candy” holiday. Apparently, “trick or treating” didn’t start until the 30s and 40s, but even then, candy was not the accepted treat (more likely was coins, nuts, fruit, toys, cookies, and cake, and the “trick” side of it was also just as important as the “treat”). It wasn’t until the 70s that candy became the most accepted treat, and nowadays none of the kids are looking forward to executing pranks more than the rewards they may garner.

However, despite the candy industries’ shameless hijacking of an old holiday (this year, it is estimated that Americans spent over $2 billion on candies to hand out), I have to say it was fun. We’d never done it before (with the exception of Abe when he was young), and the kids had a blast. They had no idea that there was so much candy in the whole world, and they found it truly amazing that they could walk up to people’s houses and they would fill their pumpkin baskets.

They also really loved dressing up. Vickie (with the help of her sister) had made them each a super cool costume. Nicky was (and is) a little monkey, and Leo was a cowboy riding a dinosaur. Leo even came 3rd in a costume competition, which of course, he was really happy about.

Abe’s brother, Augie, set up a trailer with hay bales. Some of his friends with small kids then joined us on a hay ride around town. I think having the other kids made the whole thing extra special for the boys, so thanks, Augie.

We are now back home, recovering from the trip, and the mountains of candies have been put away in the cupboard, to be dished out at a more civilized rate 🙂