We have made and raised a big wind generator, called Gordo, for our off-grid power system. 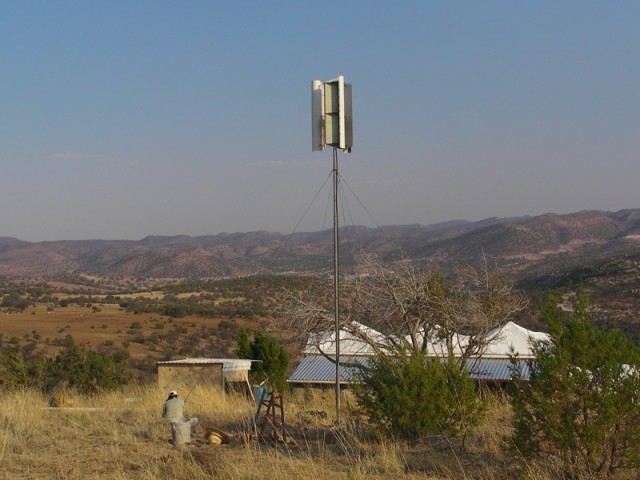 This is a project we’ve been working on periodically since February, in our spare time as it were. We made the whole thing from scratch – motor, blades, tower, etc. – mainly based on an Ed Lenz design.

It is a vertical axis machine, which is slower than a horizontal one but sturdier in many ways.

We first put it up a while ago and had to take it down after a crazy wind bent the blade unit. We reinforced several places in the blade unit and re-raised it.

[flickr_set id=”72157633881302047″] The next problem we encountered was it wasn’t getting up to 12 volts, even in strong winds, so we took it down again and did some tests. We tested the voltage at certain speeds (using a bike speedometer) in various configurations – as it was, reducing the gap between the magnets and stator, with an extra set of magnets on each magnet disc. This latter and the gap both made a large difference, and seeing as we have a bunch of these magnets, it didn’t hurt us at all.

So, it is now back up again and all working great. Although the blades will almost start turning if you stand by the tower and blow, they don’t get fast enough to charge the batteries until about 12-15 mph. We are only measuring voltage right now, but will soon be adding an ammeter to see how much power goes into the batteries.

We really like it, and will definitely be keeping it, as we get a lot of really high winds (and even higher gusts) in the Fall and Spring. However, we are now also planning on building a big, horizontal axis machine that will pick up more power in the lower wind speeds.

As to Gorgo 1.0, we probably won’t do a howto for a while, but there are 150 odd photos in the above flickr set for anyone interested in the process of making it.