Another litter of cavy babies. 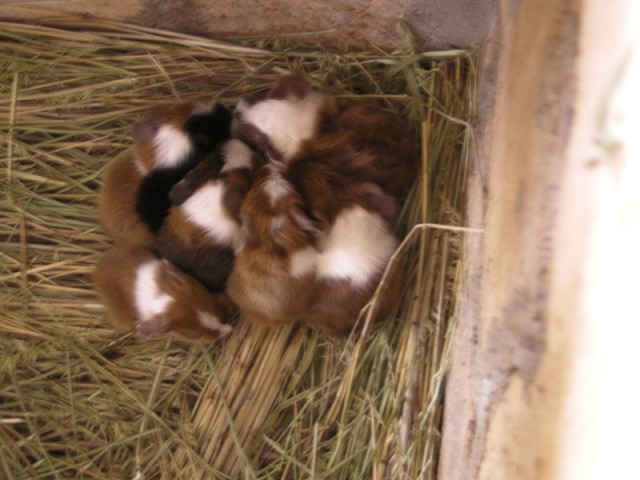 Yesterday, when we went and gave fresh grass to the guinea pigs and rabbits, Essy (our female cavy) came out of the burrow about half her previous size, and she had been HUGE.

We opened up the burrow lid and sure enough there was a huddle of very cute newborns. There had been 9 in total, but 3 had died, still in their birth sack. 9 is an enormous litter size for a guinea pig, and the literature we’ve read says that 4 is the ideal number for best survival rates.

[flickr_set id=”72157632635820724″] One thing we kind of messed up on was when Essy got bred this last time. When she had her last litter, they’d been living in the house. Ping (the male) had been in with her right up until she delivered, as they are very fond of each other and we thought the companionship was important. As soon as we woke up and saw babies, we took him out of her pen, as there is a postpartum estrus. Unfortunately, we didn’t act soon enough, for this present litter shows that she was bred right after she gave birth. This is something we always try and avoid. This time around, Ping has his own pen, with the males from the last litter for companions, so we won’t make the same mistake again.

One very cute thing to mention, cucumber ends is one one of Essy’s favorite treats from the kitchen scraps we give them, and yesterday, she carried the only cucumber into the burrow for her babies to eat. What a great mom!