A little update on the pool cover we've been using. 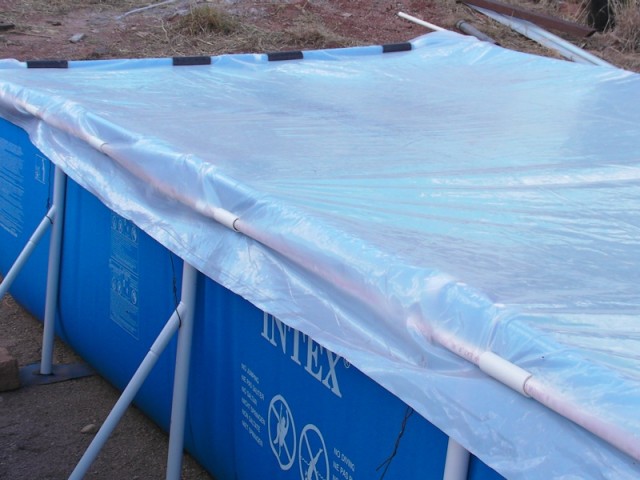 The last I wrote, we had made a black plastic cover that floated on the water. Well, it didn’t work out. The two main purposes of it were to heat the water and to prevent evaporation, and it did neither. In fact it seemed to make both worse!!! Water seeped through the silt fence that we used for half of it and then evaporated off extra fast as it was black and hot. And as for the temperature, I have no idea why it didn’t work. It heated up the top inch or two, but seemed to keep the rest colder than it should have been.

So I made a different cover and it is working great on both counts. The temperature is positively toasty (as opposed to “Make you gasp” cold), and evaporation is nil. It consists of greenhouse plastic. Both long edges are attached to pieces of half inch PVC with chunks of 3/4″ PVC that have a slice taken out of them. One side is then attached permanently to one side of the pool. The other side is just attached by bungee cords, so that we can take it off easily. The short sides are attached with 1 1/2″ clamping chunks that we made.

We have also been cleaning it by siphoning water (and any dirt/algae that settles) off the bottom twice a week for plants and trees. Then we add new and clean stuff from the tank. It’s working great, but we do need to set up a proper bio-filter on it at some point. We will also get a few minnows to put in there this weekend, so that they can eat any mosquito larvae that will soon start appearing.

All in all the family is very happy. We swim at least once a day and have even gone in after dark with the stars overhead.