Our growing rabbits needed more space, so we made an outdoor rabbit run. 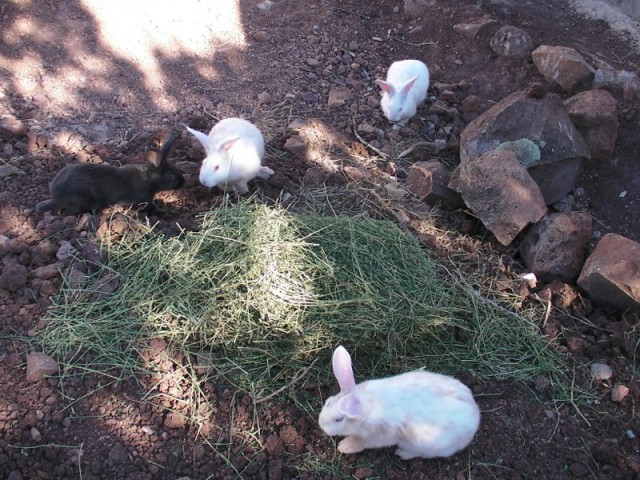 These new rabbits we have are awesome. They produce large litters and those litters reach butcher weight much sooner than rabbits we’ve had in the past. Plus we have them in the cage and burrow setup as opposed to a colony, so we haven’t been losing any to trampling, heat, snakes, and the like. Our production rates have gone up considerably, and our mortality rate has gone down. Great!

[flickr_set id=”72157640994885974″] There is, however, a downside: the cages we had for the weaned rabbits are insufficient. They were fine while a doe here or there would miss a breeding, but that doesn’t seem to be happening much now. We are now in full production, and we’ve run out of space for the growing rabbits, of which we have 60 at any given time.

So we’ve added a colony type area to the setup. There is a triangular space from the northwest corner of the water tank and the northwest corner of the barn that wasn’t spoken for. It is now fenced off, with a feeder, a water nipple, and a little shelter. There’s a concrete area that runs along the north of the barn wall, so it will always be cool and shaded for the hotter parts of the year (which seem to be starting already). We’ll probably plant a tree or two in the future, but for now, this area is a perfect spot for the older growers.

There are now two single cages for 4-6 week old babies, as they get gradually weaned (not the whole litter at once). Then there’s two double cages for 6-8 week olds. At 8 weeks they go to the outside pen.

We put 20 in there yesterday and they seem to be loving it. Plus Leo and Nicky have found their new favorite place to be. The rabbits are so tame, and the boys love to sit in there petting anyone who hops along.