We have just finished building and installing a Rocket Mass Heater, and it works great. 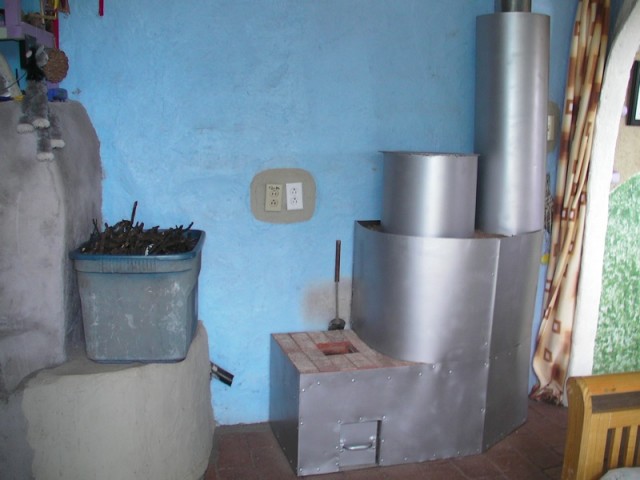 We had a regular wood-burning stove in the living room, but decided to replace it with a rocket mass heater (RMH) because it is more efficient and has more thermal mass. In other words, it uses less wood and the heat lasts for a lot longer.

[flickr_set id=”72157632015790209″]
The project took quite a bit longer than we thought, but it was worth it. Although our house really doesn’t get that cold and definitely not yet, we went ahead and lit a fire last night, just to test it out. We kept it going for 40 minutes, using a small bundle of twigs, and the heat stored in the thermal mass lasted for at least 5 hours (at which point we went to bed).

So, what exactly is the principle of this wonderful new addition to our home? By way of explanation, the RMH consists of four main components. The first is the fire box, made out of fired bricks. It has a grill and ash box beneath it. You light a piece of paper and get some twigs burning within the box. Then you add more twigs as and when they are needed. No smoke or flames come out the top of this box, because the draft from the heat riser pulls the fire horizontally. 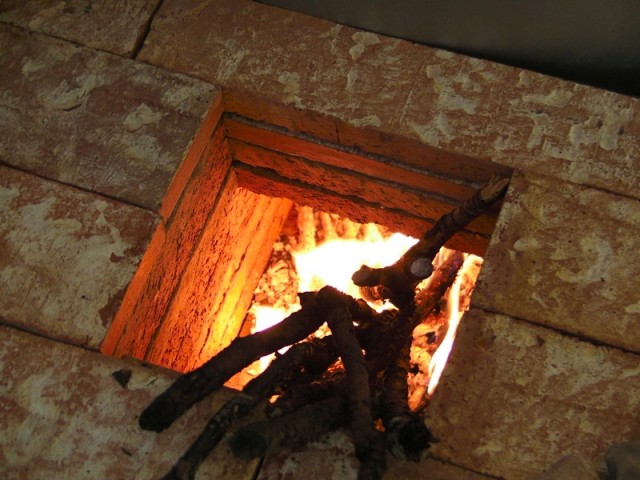 The second part is thus the heat riser. The smoke and heat from the fire moves laterally and then up into the riser. Our riser is a thick piece of pipe, 32″ tall. It is surrounded by a tube that holds 3 inches of perlite. The perlite insulates the riser, increasing the draw and thus sucking on the fire. There is then a second barrel around the perlite tube, which allows the smoke to move from the riser, down and out to the stove pipe. This barrel has a lid welded to it and can be used as a hot plate for cooking, and believe me, it gets very, very hot.

The third component is the stove pipe. It leads out of the living room, into a heat exchanger in Leo’s room, and then out of the house. There is actually very little smoke produced by this stove, as it is mostly burned off by the high temperatures incurred by the RMH. 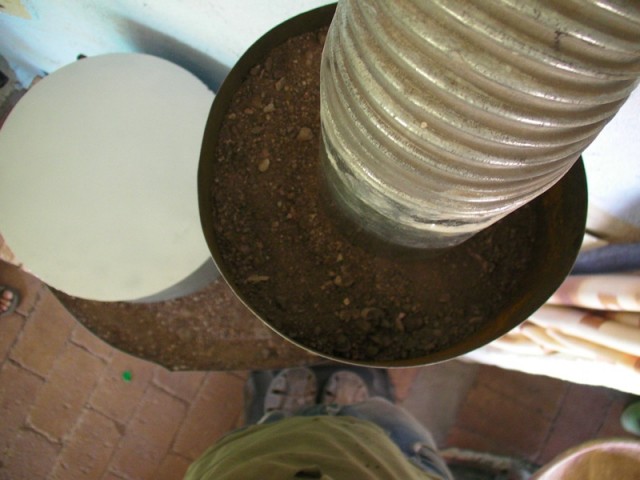 The final part of the stove is thermal mass. In our case, we used sand, but adobe or similar earth materials are often used. The first three components all sit within a sheet metal exterior and are surrounded by sand. As the fire heats up the interior metal components, that heat is transferred to the sand, heating up the external metal. It takes a little while to heat up this sand (after burning a fire for 40 minutes, the external metal ranged from very hot to warm, so it would require a little longer to get it all really hot), but then it stayed that way for over 5 hours without burning additional wood.

Because the RMH is very efficient (uses 1/8 the wood for the same heat output), you can use less wood.  It can also be of a lower quality.  We have been collecting trimmings and prunings from the apple orchards in the village for some time now, and these sticks and twigs will be the fuel for our RMH.  Small diameter sticks are easy to come by, even in the desert, so we have an endless supply of fuel.

We hope to get to know our heater better over the coming months, but for now we are satisfied that it was worth the effort it took to construct it.