Our community’s first ever science fair was a big success. 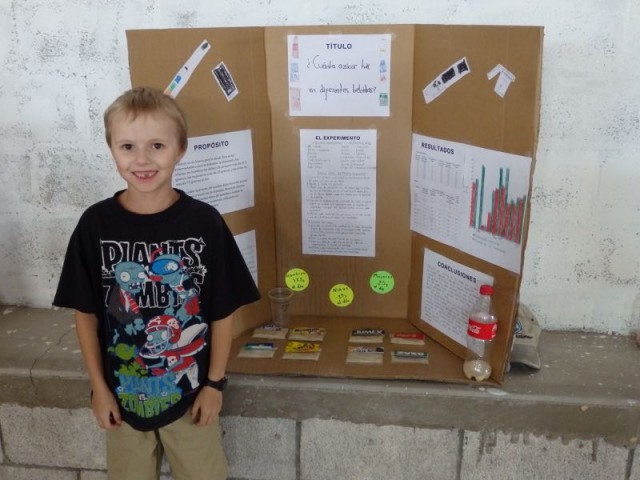 The reason I haven’t blogged in so long is that both Abe and I have been completely occupied and obsessed by a couple of big projects. I’ll deal with Abe’s in a different post, but mine was organizing a science fair at our local primary school (as I mentioned in the post on “Starting a Science Fair”).

Because it was the first time the kids had ever done anything like this, it ended up being a lot more work than I had originally anticipated. There are 25 kids in the school, whom I helped with each stage of the scientific process (proposition, hypothesis, experiment, experiment plan and list of materials, results and graphs, conclusions). Still, when it was all said and done, it was well worth it.

We did almost all the experiments together in class, which the kids loved (of course!). They also really liked seeing the end result, when all the work they’d done was on their presentation boards.

The event itself, held on 12th May, was great. We had three judges, who went around looking at each project and talking to the kid who did it. Every kid got participation prizes, but we also had some cooler prizes for 1st, 2nd, and 3rd places for each of the three groups (1st/2nd grade, 3rd/4th grade, and 5th/6th grade). Different friends, family and acquaintances had donated old phones, tablets, laptops, and cameras for these prizes. These were a huge incentive to the kids and very much appreciated.

I’m kind of relieved it’s all over and I get a little free time to relax and catch up with all the jobs I’ve been neglecting. However, it is definitely something I want to repeat. We’ll be making it into an annual event, even if the theme of the project changes from year to year. If you would like to donate a prize for the next school year, I have a public Amazon wishlist going, from which you can purchase any of the prizes.