The only snow of the year caught us completely by surprise. 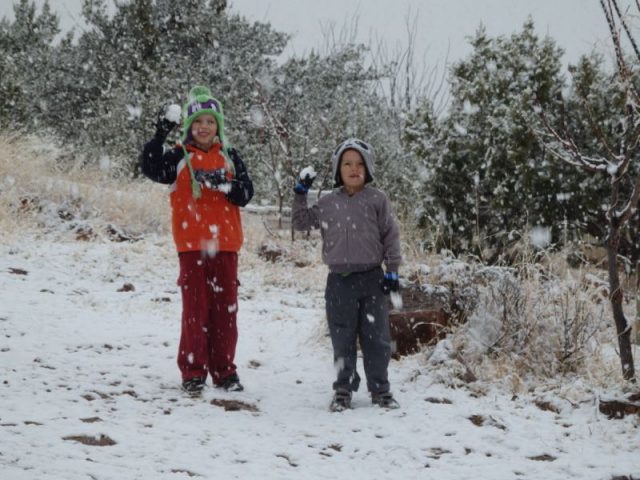 We have had an extremely mild winter this year. In fact, we had tomatoes still growing outside until mid-January, and it was getting up into the 90s in early February. We figured that we were passing straight from fall to spring.

The day that Abe was due home from his trip, the boys and I woke up and got ready for school. As I was getting a few chores done before leaving, it started to snow. Within minutes, there was a full blown blizzard and everything turned white. School was cancelled (not being prepared for the sudden turn in the weather), and so the kids instantly went outside to make snowballs.

They had a blast, and the only thing that detracted from their joy at the snow was the thought that “Papa won’t want to come home if it’s cold!”. I told them not to worry, that he was already en route. Still, they needn’t have worried, a couple of hours later all the snow had melted and the sky had turned blue again. Abe came home thinking that I must have photoshopped the picture I’d sent him!!!