On Monday, we processed our second, and last, pig. 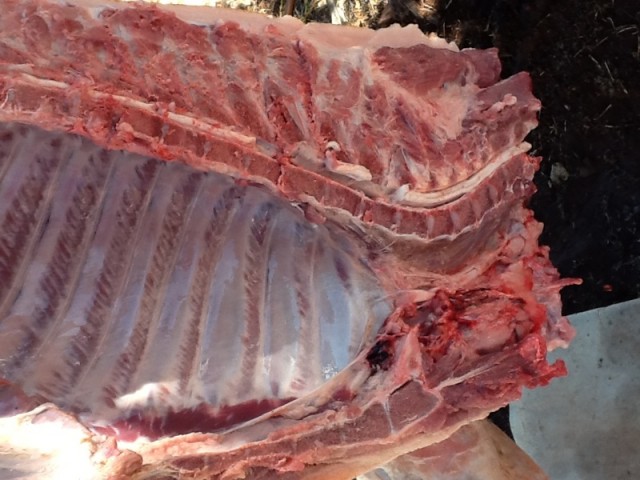 We’d been meaning to butcher her a little sooner, but we were waiting for a cold front to move in. It never did. It has been in the 70s or low 80s for pretty much the whole of February, which is unusual, as we usually get at least a light freeze or two.

The fact that it’s currently getting hot during the day meant that we had to get up at 6 to start the ball rolling. Everything went smoothly, and we got the meat cut up and into cold water or the freezer before it ever got warm outside. The new skinning method we’ve been using (in the video below) is definitely one thing that helped it all go faster.

On Tuesday we made the sausage and rendered the lard (a little more this time – 3.5 liters as opposed to 1.5).

For more details on how we weigh the pig, what we feed, and other details, refer back to the Pork Resupply blog. Or read about the Food Web philosophy for an holistic explanation of our food production.

The cost to raise both pigs, including purchase price, was $260. The total meat from both was 275 lbs (and that doesn’t include lard, organs, tamales from the head, or posole from the feet). So each pound of meat, even the 82 lbs of delicious smoked ham, cost us $ 0.95/lb The first pig turned out to be cheaper, as the efficiency rate starts to go down after the pig weighs about 220 lbs. But still, not a bad outcome.

We are now pigless, and will probably remain so for a few months. However, this does cause a hole in our Food Web, as we are now starting to produce more rabbit viscera than before, and the poultry on their own can’t quite keep up with it. Of course, the dogs are happy to step up their efforts, so it doesn’t go to waste. We hope to get some Muscovy Ducks soon, which will certainly help bridge the gap. But if that isn’t enough, we may need to get some more pigs sooner.