The last two days have been spent processing one of our pigs. This has given us an opportunity to see the promise of integration for reducing costs. 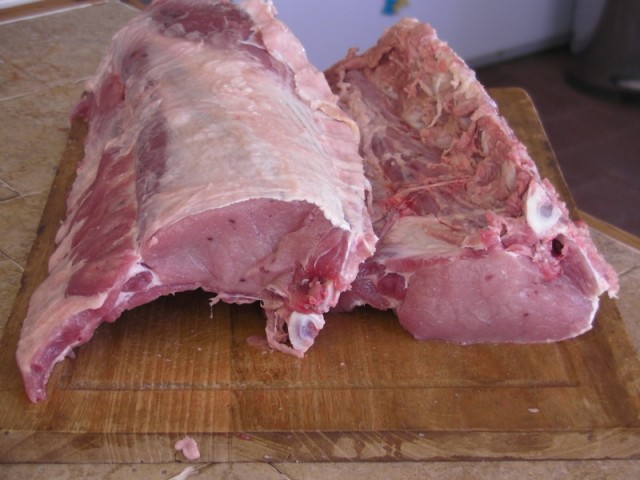 If you remember, we bought two piglets in September and we’ve been raising them as part of our integrated Food Web system in the barn.

We have been giving them a grain mix from a feed mill, but they have also had ample access to a whole array of free food: rabbit viscera, apples (both fermented and fresh), grass in the pasture, grasshoppers, worms, kitchen scraps, discarded alfalfa and poultry manure. You may not think the latter is haute cuisine for pigs, but they were going out of their way to gather it from under roosts and around the pasture, so we decided to put the guinea roost over part of the pigs’ interior pen, and it is always sparkling clean. 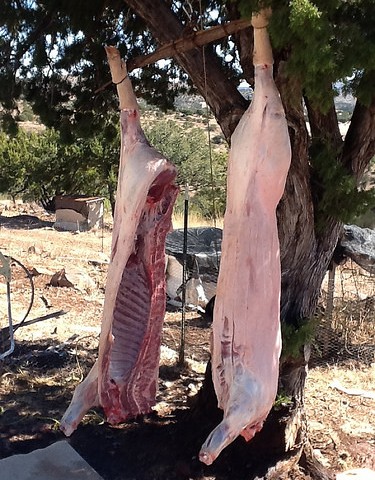 In this equation, HG is the heart girth (measuring around the chest) and L is from the crown of the head to the base of the tail. We’ve used this method for a while now, and when we had to take a pig to a real scale, we found that we were within 5-10 lbs accurate.

Woogie measured in at 220 lbs the other day, so butchering became top of the To Do list.

The killing part is always the worst thing about raising any animal for meat, and we try to do everything we can to make the process as quick and painless for all involved. This time, something cropped up that we hadn’t anticipated. Our spoiled rotten chickens. The poultry all free ranges and the chickens tend to hang out wherever we are, or if we’re inside, with the pigs (sometimes standing on top of them while they snooze). Of course, where there’s a pig and a person, as was the case on Thursday morning, then there’s bound to be a whole bunch of chickens. And that was the unexpected problem that Abe encountered. Our other pig was out to pasture, a long way away, but what to do with these clucking females that keep getting underfoot? I think some pushing with his boot may have been involved. 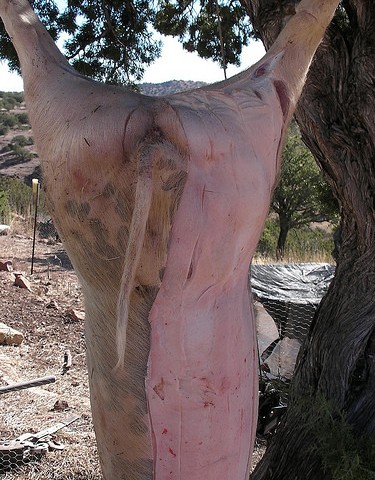 Strip-skinning, however, turned out to be a lot faster and easier. I cut 2″ strips from the head to the other end, with a box cutter.  The box cutter just penetrated the skin, and Abe would then cut the end of each strip loose from the fat before pulling it free with a vice grip. It was much faster than how we’d been doing it and hardly any fat was stuck to the strips.  It resembles peeling a very large banana.

So the first day was spent killing, gutting, cleaning and cutting up the meat. We ended up with 114 lbs of various cuts. Most was weighed and bagged up in the freezer. The hams, shoulders and bacon were weighed and put in a cure (which means for the next 10 days my fridge is very crowded, but I guess it’s worth it!).

Yesterday, we ground up the sausage, which was an additional 13 lbs. Plus the lard, which hasn’t finished rendering, but it won’t be too much as she turned out to be a big, but fairly lean pig.

The head, some meat and the feet were given to a friend of mine. She’s going to make tamales (head and meat) and posole (feet), the former of which she’ll give us a portion. The organs were also gifted, as we prefer rabbit livers (much milder) to those of pigs.

This is how we cut things up:

This is a testament to the Food Web concept.  By integrating livestock and waste streams, we significantly reduced cost and labor required to produce quality meat.