Last week (or was it the week before?) we had to catch up on a few jobs at the town house, all of them water related. 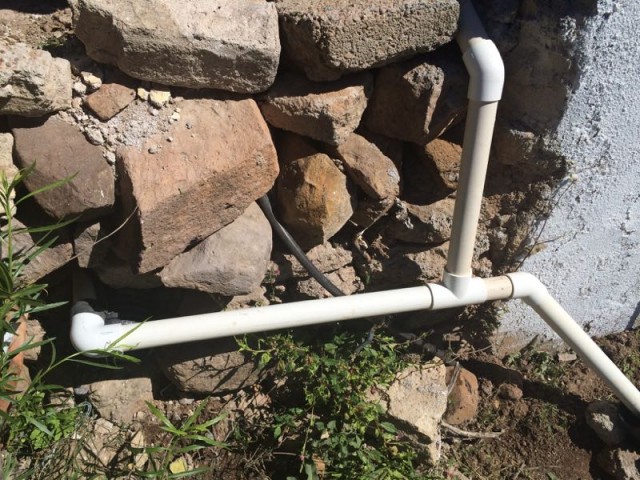 The most pressing issue was the main water line. It was old and in a place where cows frequently hung out, so it had sprung several leaks. Because nobody had lived in the house for so long, these leaks had been patched rather than repaired properly, so new wet spots kept appearing. Instead of replacing it, we decided to move it. We turned off the valve where our line began and cut the pipe. We then dug a deep trench along our southern wall (within the fence-line, so out of reach of animals) and connected it to the house’s supply. Next came the tricky part: hooking up this new line to the main water supply. Abe and a friend had everything ready and a system worked out to connect it as fast as possible. However, that split second of drilling into the line to screw in the connection inevitably resulted in a high pressure jet that soaked them both. Still, they got it done and everything worked out great.

Next up was putting in some French drains along the north and east side of the house. The way things stood with the lay of the land, these two walls were getting wet and staying damp during the rain season. This would eventually damage the thick adobe walls if left as is. So, we dug up the ground at the base of the walls to below the foundation (which is surprisingly deep). We then put a vapor barrier up against the structure and placed a drainage pipe (4″ black pipe with holes in it) at the bottom of the trench. This pipe sloped down and away from the house. We then filled in with rocks around the pipe and then gravel on top. Water will usually travel the path of least resistance, so it passes quickly through the gravel and rocks, into the pipe and away from the house, instead of sitting up against the house. 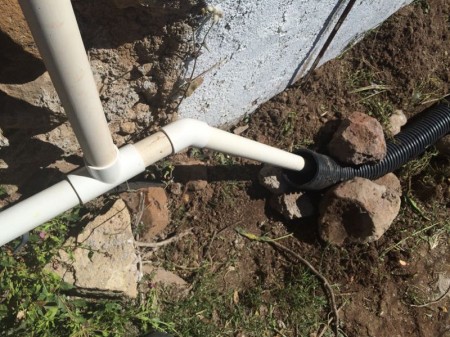 While we were in the water management mood, we rerouted the grey water from the bathroom and kitchen into a flower bed on the south side. It seemed such a waste not to be using this water for something useful. We dug a pit all the way along the south wall and put a drainage pipe into it. We then piled weeds and mulch on top of the pipe up to ground level. The pipe from the sinks, shower and washing machine now feeds into this pipe, so that the water can be distributed evenly along the trench. We will now be planing various plants beside the trench to make use of that water. 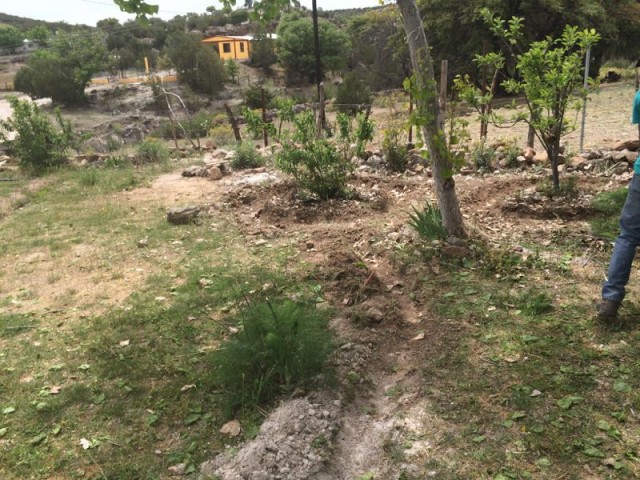 The house finds itself downhill from the runoff of two other houses and a road, so during rain season, we get a bunch of rain flowing into the yard and making everything pretty soggy. We decided to reroute this water, via trenches, to the trees that are planted. We added French drains and gravel around the house to make it a well-drained high spot, and then put trenches at different levels leading over to the peach and apples trees (not to mention asparagus patches).